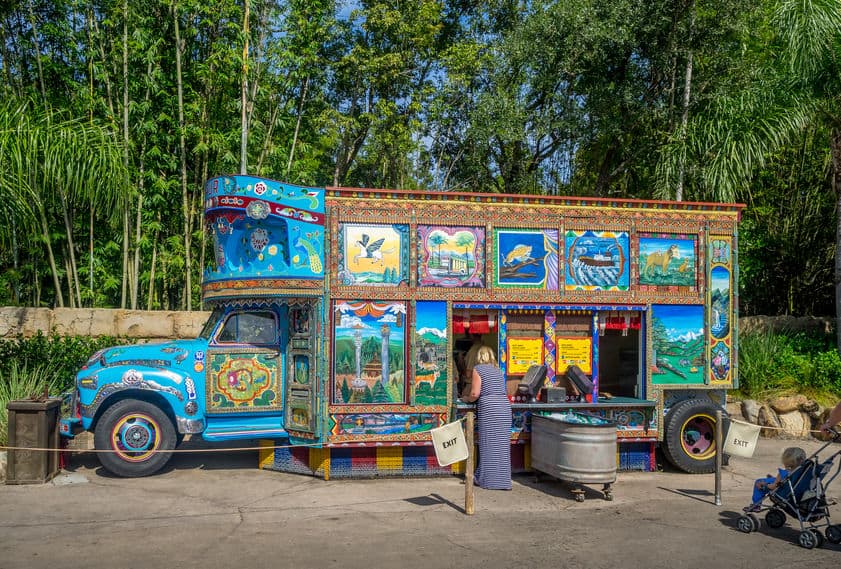 Anyone who assumes that the Animal Kingdom is a park good enough for a half-day trek was not thinking of their stomach. Believe it or not, Animal Kingdom happens to be one of the best Walt Disney World dining experiences you could ask for. thanks to the strong dessert and snack game, Animal Kingdom is arguably best visited as a two-day foodie adventure. Between savory snacks you can share and stands to offer treats, there are restaurants serving side dishes and desserts.

Among the best snacks at the Animal Kingdom, be sure not to miss the baked macaroni and cheese! Stroll over to Discovery Island in the Animal Kingdom and head over to Eight Spoon Cafe. Of course, only one spoon is necessary to enjoy the world-famous baked macaroni and cheese. This is a great place to get your fill of this tasty snack. You can get the baked mac and cheese in the form of a snack as you walk around. You even amp it up one level by trying the variation which includes the Baked Macaroni and Cheese with Sweet Chili Sauce and Shrimp or the Baked Mac and Cheese with Pulled Pork.

Never has baked mac and cheese been so cheesy and delish. Most would agree this is hands down one of the best snacks at the Animal Kingdom. If you think you have tried every possible baked mac and cheese version there was to try, this one from the Animal Kingdom is a definite must-try. You will love this flavorful creation in different versions. Order all three versions and watch as the kids and yourself end up wanting even more!

If you haven’t had cinnamon glazed almonds or pecans at the Animal Kingdom you need to add them to your Disney bucket list. This memorable snack is easy to share and has a great taste you will want more of.

It goes well with many different drinks at the Animal Kingdom. Pick up cinnamon glazed pecans or almonds in Asia’s Drinkwallah or Africa’s Mahindi Kiosk.

If you need a snack on the go that you can hold with one hand, head over to Asia’s Caravan Road and get yourself a Teriyaki Beef Slider. you can eat this with pickled cucumber for a crisp bite that goes superbly with the Teriyaki juicy beef. You might as well get two orders because you will want to line up again the moment you take that last bite! If you already love teriyaki, you will love it in sandwich form as beef sliders! Good to the last bite, you will probably be stuffed enough till sunset. This snack gives you enough energy to last until you have gotten your fill of Animal Kingdom.

Most Walt Disney World fans know that a Turkey Leg is a staple snack. At Animal Kingdom, head over to Asia and check out Yak and Yeti quality beverages. This window is behind the Local Cafe of Yak and Yeti. Known as a lounge, you will love the delicious Turkey Legs available right here! Perfect for Thanksgiving or any other day, Turkey Legs from Animal Kingdom is perfectly marinated every time. This is perfect if you are on a low-carb diet and need your protein fill for the day. There is nothing quite like pure protein from a perfectly cooked turkey leg to get you through the day.

Swing by Dinoland USA at Trilo Bites and get yourself some Buffalo Chicken Chips. This tiny kiosk happens to carry one of the best Animal Kingdom snacks you can hope for. These zesty chicken chips are topped with Buffalo Chicken and diced tomatoes, celery and other fresh vegetables. You can also get yourself a blue cheese topping. A real treat for the taste buds. You can also go to Discovery Island’s Terra Treats and check out the Buffalo Chicken Wings if you love Buffalo chicken but are not exactly a chip person.

Have You Heard Of The Pineapple Dole Whip?

You can even get an adult version including the Coconut Rum Dole Whip or the Dark Rum Dole Whip. Aside from this amazing Tamu Tamu liquid snack, you can also get a chocolate waffle order with chocolate mousse or vanilla ice cream on the side. This way, you can have your Waffles and Whip it, too!

Believe it or not, you can get onion rings-to-go right here at the Animal Kingdom. Share it with friends or eat it solo. Order two just to be sure you don’t have to line up so soon again! Just in front of the Tree of Life, make a quick right turn into Discovery Island’s Flame Tree Barbecue to begin smelling the amazing aroma of barbecue smokehouse that seeps its way to you from Flame Tree Barbecue. This option is a sit-down meal but you can also just pick up the crowd favorite which happens to be the onion ring basket perfect for sharing. Dip these rings in ketchup and share or keep to yourself. A truly enjoyable snack, you might as well get two to avoid having to fall in line all over again.

What Is The Fuss With The Elephant Ear Pastry?

Once you have tried The Elephant Ear Pastry, this may very well be the reason you keep coming back to the Animal Kingdom in the future! You may walk past Kusafiri Coffee Shop and may not even know it, particularly if you are on the way to Africa’s Kilimanjaro Safari in the Animal Kingdom. This coffee shop hole in the wall has a simple window that takes your orders. Don’t be fooled by the exteriors. This shop has an amazing menu of beverages, snacks, and even small entrees. The gi-normous Elephant Ear Pasty is the go-to order of the day at Kusafiri, every day. This puff pastry wrapped in sugary pastry gives you just the right of sweetness without going overboard. It is also filling in its size. The ear tips of the elephant are dipped in chocolate. The Elephant Ear Pastry is so in-demand, don’t be surprised if there happens to be a line forming outside of that window. If you need a fix of the Elephant Ear Pastry immediately, you can also get one at Discovery Island’s Isle of Java.

What On Earth Is A Pongu Lumpia?

A strange-sounding name for such a delicious creation, Pongu Lumpia was inspired by the movie Avatar. You may end up loving the snack more than the movie, however, it is made so well. Crispy on the outside and utterly creaming and delicious on the inside is not to be missed! Pongu Lumpia is a Pandora-inspired snack you will want to keep eating the entire day.

Grab a taste of this one-of-a-kind, extra delicious spring roll at Pongu Pongu. The moment you get off Avatar Flight of Passage you can stop at the Pongu booth inspired by Pandora just outside of the Avatar Flight of Passage exit. This spring roll contains cream cheese and pineapple that is smooth as silk and extremely delish. You will love the burst of real pineapple in each bite. This amazing snack goes quite well with the available beverages also available at Pongu. The Colossal pretzel and the Viper Claw of Pongu are also not to be missed. These are some of the best snacks at the Animal Kingdom without a shadow of a doubt.