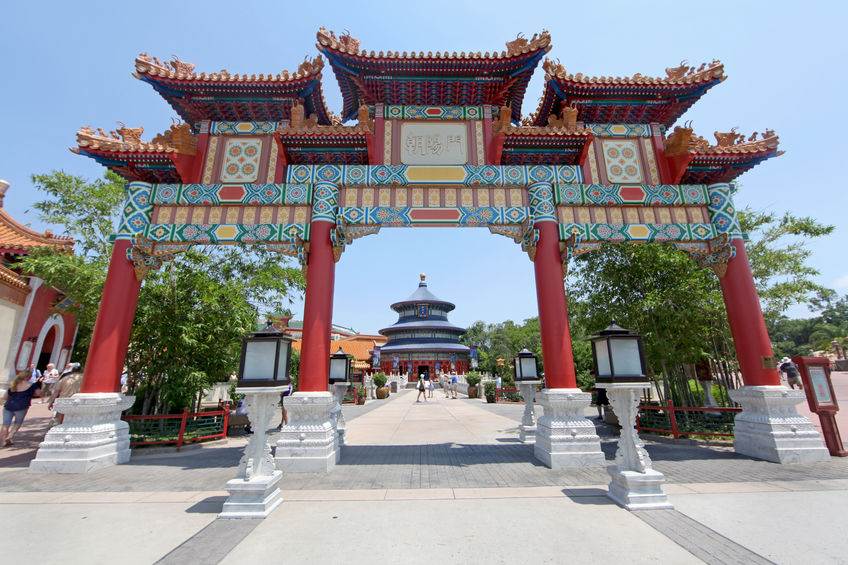 Mulan is my daughters favorite Disney Princesses and for good reason. She knows what she wants and she is tough enough to go after it without hesitating. That’s why many people want to take a picture with her whenever they go to Disney World. Right now the only place where you are guaranteed to meet and great Mulan is the China Pavilion at Epcot.

Mulan is almost always taking pictures with people and signing them autographs at the Temple of Heaven, located in The China Pavilion at the World Showcase in Epcot. The best time to meet Mulan is early while everyone is getting on rides.

Her schedule goes from 11:00 AM to 5:30 PM, but she takes a 20-minute break every half hour or so. Check the Epcot Time Guide for accurate timing information.

Can I Take Photos With Mulan?

Yes, of course, you can take pictures with Mulan. If you want to take a really nice picture, you should consider going early enough because the lighting is perfect and everyone is mostly focused on the Future World section.

You can also check the Time Guide -don’t forget to take it at the entrance- if you want to check the Jeweled Dragon Acrobats at the same time you visit Mulan.

How Much Does it Cost to Meet Mulan?

Mulan is part of the park visit, so there is no extra fee for the meet and greet with Mulan. If you are taking a picture with your own camera, it won’t cost you a dime as well. As long as you are in the park, there is no problem.

However, take into account that Disney has their own photographers. If you ask them to take a picture you will have to make a purchase.

Is a FastPass Necessary to Meet Mulan?

No, FastPass is not necessary to meet Mulan. Mulan will not go away as long as you are waiting for her to meet and greet you. Although lines to meet her are not as common, they are usually very short.

Fastpass is a valuable tool and you should always consider how to use it strategically. If you already know the park, think where to use it before going to the park. Otherwise, you should see for yourself which attractions have the longest lines and consider which one you would like to try out.

Is There a Mulan Ride at Disney World?

Sadly, there is not a Mulan ride currently and there is currently no news that Disney is planning to build one. However, it would be incredible to have some really great adventures in Ancient China with the first woman warrior in the continental country.

However, keep informed because the new Mulan live-action movie will be in the theaters by 2020 and it may raise enough popularity to build a great park sponsorship. If things go right maybe we can get some renewed attention on Mulan and a ride out of it.

Is Mulan in a Parade?

Unfortunately, no parades are featuring Mulan at this moment.

There used to be a Mulan Parade at Hollywood Studios but it was replaced a while back and no longer is active :(. Hopefully, with the live-action movie coming out we will get a lot more Mulan exposure.

Where Else Can I See Mulan?

If you missed Mulan in her usual meet-and-greet hotspot, sometimes you can find her at Akershus or Cinderella’s Royal Table. Take into account she is not there all the time, but you may be lucky enough to bump with her.

If you don’t mind sacrificing the picture and autograph, you can also spot her on the Steamboat Willie Boat at the end of the Fantasmic! Show, which takes place in Mickey’s dream along with other 50 good and evil characters confronting each other.

This show is offered almost every night but you should always check the Time Guide so you can get more accurate information. Sadly, the heroine doesn’t have a show of her own but maybe someday she will.

Are There Dining Options Based on Mulan?

There are no dining options based directly on Mulan, but in Epcot’s China Pavilion there are a couple of spots based on the Chinese experience.

The first one is Joy of Tea. Even though this is not exactly a restaurant, it is a cute and small place with the typical Chinese house structure where you can have a small refreshment and taste some of the best tea you’ll ever drink. The second one is the Lotus Blossom Cafe, a small cafe that brings you back to the Chinese empire -which is more or less when Mulan takes place.

The third and last place is the Nine Dragons Restaurants. This is a place where you can definitely have a proper Chinese dinner and experience the long evolved flavors of the Eastern culture’s golden ages.

Where to find Mulan’s souvenirs at Disney World?

True Mulan fans can find her figurines, dolls, and pins at the Epcot’s Disney shop. If you want to check out the ones you like the most, the shop parks app will give you a hint of all the stuff related to Mulan you can buy.

Although there aren’t many items of Mulan in comparison to other items, you can find the ones that your kids will love the most. So, prepare for the whole Disney experience and find out your Mulan souvenir beforehand.

Is Mushu at Disney World?

Even though Mushu used to be part of the meet-and-greet characters when the movie first came out and the red dragon would be an amazing memory asset, Mushu is no longer part of the park.

Mulan was one of the first three movies produced at the building that hosted The Magic of Disney Animation. The movie created when Disney’s Hollywood Studios had an in-house production studio and is based on the legend of Hua Mulan, one of the first women warriors in China with historical records, who lived somewhere between the 420 and the 589 C.E.

Even though Disney did an amazing job raising her story to the eyes of the entire world, the truth is the real character doesn’t have much to envy the animated version.

According to the records, Hua Mulan was a woman whose father was too sick and brother too young to serve in the army. As she was trained in archery, sword fighting, and martial arts, she decided to take her father’s place with her family’s blessing. After 12 years of service, she goes back home with her family and it was just then that the fellow soldiers realized she was a woman for the whole time.

The story remained alive in a word of mouth poem and it became later the main character of many books and plays that brought her to the living legend we know today.