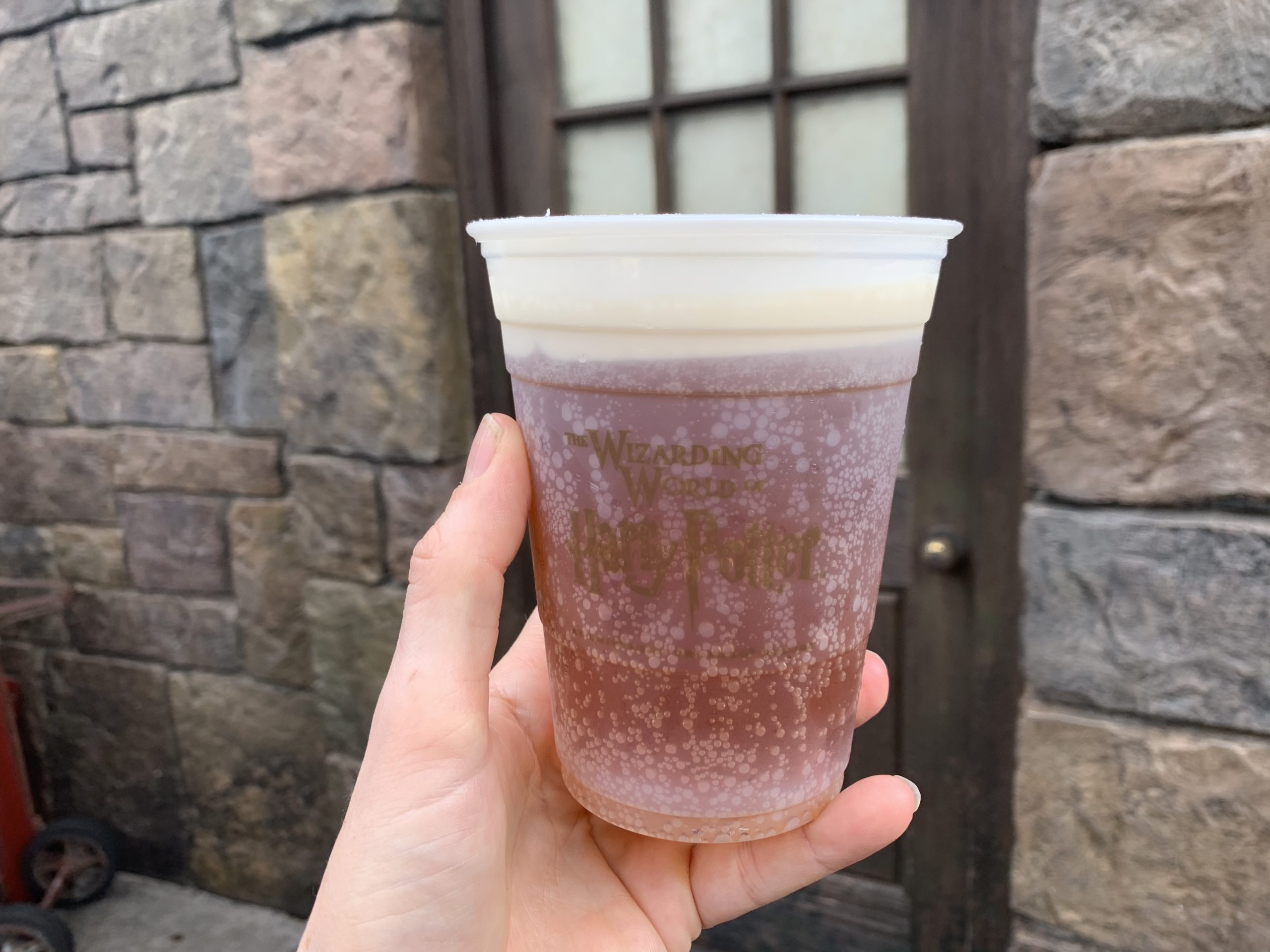 Fans of J.K. Rowling’s Harry Potter and Fantastic Beasts series know butter beer as a delicious wizard drink that’s like something like butterscotch. But until The Wizarding World of Harry Potter at Universal Orlando Resort made it a reality, butterbeer was confined to the beloved books and movies. Since it was first introduced, this perennially popular beverage has gone on to become a culinary revolution in its own right. It is, hands down, one of Universal Orlando’s bestselling items. Butter beer alone helped Universal recoup within six months the $260 million investment in the Hogsmeade pavilion at The Wizarding World of Harry Potter.

So, it goes without saying that a trip to Universal Orlando is incomplete without sampling butter beer. If you’re the kind of person who likes to be prepared with all the practical considerations before your trip, you’re probably wondering: Where are butter beer locations at Universal Orlando?

Butterbeer is available at locations throughout The Wizarding World of Harry Potter at Universal Orlando. The popular treat is sold in various forms, both hot and cold, in Hogsmeade and Diagon Alley. Universal Orlando also sells special variations of butterbeer at exclusive locations during the holiday season.

What is butter beer?

Butter beer is a fictitious drink that author J. K. Rowling invented. It is heavily referenced throughout the Harry Potter books. Some people believe it is based on the buttered beer that people drank in the 16th century, but the author simply describes it as a little “less sickly” than butterscotch.

For the most part, butter beer is a hybrid of butterscotch flavors and cream soda. It’s a sweet beverage, some would say too sweet. Butter beer usually comes with a frothy topping in place. Yes, that’s where all the fun mustache photos you see on social media come from.

You can do more than just drink butterbeer

When it was first introduced in 2010, butter beer came in two forms, frozen and cold. Cold butter beer is almost like a cream soda, complete with fizz and whipped topping. Frozen butter beer is like a slushie that’s particularly refreshing in the Florida heat.

In 2014, Universal experimented with a hot butter beer, which continues to be offered seasonally every year in the winter months. The hot version of butter beer is described by fans as a butterscotch-flavored hot chocolate. Later the same year, another variant of butter beer appeared on menus throughout Universal Orlando, the butter beer soft serve ice cream, which was an instant bestseller.

Other scrumptious butterbeer products like fudge and potted cream were introduced in the following years, going on to become must-have desserts at Universal Orlando. Butter beer fudge is one of the most popular souvenirs that people take home from the park.

Where are butter beer locations at Universal Orlando?

If you know exactly the type of butter beer you want, here’s where to find it:

Is there alcohol in butter beer at Universal Orlando?

In the Harry Potter books, butterbeer is a creamy brew with a hint of alcohol. The house-elves are known to become intoxicated on butter beer, but the beverage has negligible effects on wizards and witches.

At Universal Orlando, however, despite the name, butter beer is completely alcohol-free. So, you can let your kids drink as much of the foam-topped butterscotch-flavored soft drink as you want. Just be prepared for the sugar rush.

How much does butterbeer cost at Universal Orlando?

Butter beer is a gastronomical giant and it would be naïve to expect that Universal Orlando will not make the most of this money spinner’s popularity. This popular beverage is an easy way for the company to make profits without investing in new rides and attractions. The cost of butter beer reflects this.

Butter beer is one of the foods and drinks you must try at Universal Orlando. You’ll have to dig into your pockets, no doubt, but it’s perfect for a hot day, and we can promise you it will be as delicious as you imagined.

Can I make butter beer at home?

If you fancy making your favorite beverage from The Wizarding World of Harry Potter at home, here’s a simple butter beer recipe. We can’t promise you’ll be able to crack the recipe used at Three Broomsticks in Hogsmeade, but you can get pretty close to the real thing.

Mix equal quantities of cream soda and soda water. Add butterscotch syrup to taste and put the mixture in a glass or mug. Top with whipped cream with a pinch of salt to cut through the sweetness. Finish with a drizzle of caramel syrup. Adults, if you want a little kick to your butter beer, you can add a splash of rum.

Warner Bros. sells bottled butter beer in souvenir glass bottles with a collectible label. But unfortunately, they’re only available in the UK. If you’re in London or transiting through London airports, do check out the Platform 9 ¾ Shops and pick up a bottle or two. It’s the perfect gift for aspiring witches and wizards in your family.