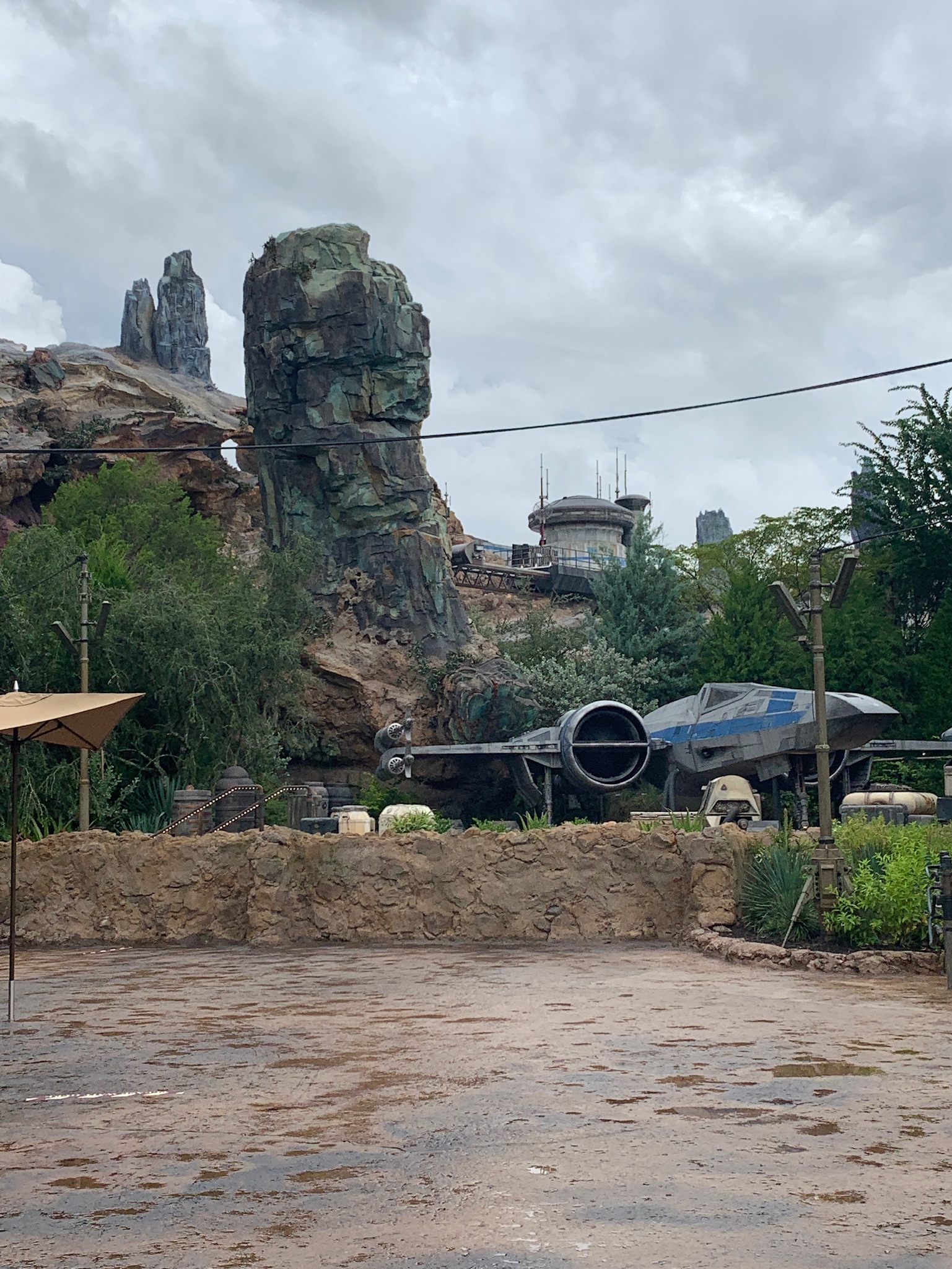 Star Wars is a rare franchise in that it has a cross-generational appeal. Inspired by its popularity, Disney has opened themed areas at its parks on both coasts. Star Wars: Galaxy’s Edge opened at Disneyland California and Walt Disney World Florida in the summer of 2019. In Florida, Galaxy’s Edge is located in Disney’s Hollywood Studios. Today, we’re answering the question: Does it cost extra to go to Galaxy’s Edge?

The answer is no. You don’t pay extra to visit Star Wars: Galaxy’s Edge. You do, however, need a valid theme park admission ticket to Disney’s Hollywood Studios in Orlando or Disneyland Park in Anaheim.

Keep reading to learn everything about this exciting new attraction. Find out about the reservation system and virtual queue system and what we think are the best times to visit.

Is there a separate ticket for Galaxy’s Edge?

No, there is no separate ticket for Star Wars: Galaxy’s Edge. All you need is a valid theme park entrance ticket. However, because capacity is limited, Disney does implement a reservation system or virtual queue system from time to time. If in use, it works through the My Disney Experience app.

How do virtual queues and boarding groups work?

Disney has been implementing a park reservation system to control crowds and ensure a safe and enjoyable experience for everyone. If you have a valid theme park admission ticket and park reservation for Hollywood Studios, you can access the virtual queue and check available boarding groups for Galaxy’s Edge starting at 7 a.m. on the day of your visit. You do not need to be in the park at 7 a.m. to access the virtual queue. You can do this in the My Disney Experience app. The queue opens again at 1 p.m. for people who weren’t able to join earlier in the day. You do need to be inside the Hollywood Studios park to access the virtual queue when it reopens at 1 p.m.

Once you are inside the Hollywood Studios theme park, go to the section called Star Wars: Galaxy’s Edge in the app. If you want to visit the Rise of the Resistance attraction, go to Star Wars: Rise of the Resistance and choose “Access Boarding Group.” When you select “Find Out More,” you will be directed to a screen that shows the current status of availability for this attraction. If boarding groups are shown as available, you can tap on “Join Boarding Group.” If this option is grayed out, it means no boarding groups are available for that day.

It’s a good idea to link everyone’s theme park tickets in the app and request the same boarding group for your party. You can keep an eye on the status of boarding groups in the app. When it’s your turn to board, you’ll get a push notification. You have 2 hours from the time your boarding group is called to go to the entrance of Rise of the Resistance.

What are the rides at Galaxy’s Edge?

There are two rides at Star Wars: Galaxy’s Edge. Millennium Falcon Smuggler’s Run is a thrilling, interactive, dark simulator ride in which you take control of the fastest ship in the galaxy, the Millennium Falcon. The crew consists of you and five others, with each member (pilot, gunner, engineer) playing an important role. To succeed in the mission, you have to outmaneuver a series of dangers on this space adventure. The height requirement for this ride is 38 inches (97 cm) or taller. The best seat on the Millennium Falcon? The left pilot seat controls the left and right movements and is the best one in our opinion.

Rise of the Resistance is the second thrill ride in Galaxy’s Edge. We’d say this epic attraction is an experience more than a ride. The massive structure has multiple ride systems and extensive animatronics designed around the forest outside Black Spire Outpost. You’re a recruit on a secret mission that has lots of twists and turns, including getting captured by a First Order Star Destroyer filled with stormtroopers. The height requirement for Rise of the Resistance is 40 inches (102 cm) or taller. The physical thrills are modest at best (only one small drop), but the ride can be overwhelming for sensitive kids.

Is there FastPass+ at Galaxy’s Edge?

FastPass+ is offered for Millennium Falcon: Smugglers Run. There is no FastPass for Rise of the Resistance – for this attraction, you may need to join a virtual queue, depending on the crowd levels.

Riders waiting in line at the Galaxy’s Edge rides can obtain a bathroom pass if they need to visit the restrooms. The bathroom pass will allow them to rejoin their party without losing their place in the line.

What else is there at Star Wars: Galaxy’s Edge besides the two rides?

Oga’s Cantina is a watering hole with an intergalactic vibe. There’s a choice of alcoholic and non-alcoholic beverages, an extensive menu, and bold music. It’s open for lunch from 9 a.m. to 3:55 p.m. and for dinner from 4 p.m. to 8 p.m. Average prices are $15 to $35 per adult in both the lunch and dinner menus. Remember, dining reservations do not include access to the park. You need a valid admission to the park for each person in your party ages 3 and up.

Savi’s Workshop is a combination show and shop where visitors to Batuu can build their own lightsaber. This is a must-do experience for hardcore Star Wars fans, but with a price tag of $200 plus tax, the experience doesn’t come cheap.

Droid Depot is the place to get a customized budget-friendly souvenir if a lightsaber is out of your budget. The experience to build your own droid is $100 plus tax.

Reservations are highly recommended. Walk-ins are accepted on a very limited basis, subject to availability. You can make reservations for each location through the My Disney Experience app or by phone, up to 60 days in advance. Remember, for in-park table-service dining, you need a valid park admission ticket and reservation for park entry through the park pass system, in addition to your dining reservation. At Droid Depot and Savi’s Workshop – Handbuilt Lightsaber, reservations should be made for all the people who want to build a droid or lightsaber. One person can accompany the droid or lightsaber builder to watch the experience.

The time of day when you visit Star Wars: Galaxy’s Edge can influence your experience. The feel of the land is very different in the daytime compared to at night. If you’re a big fan, we recommend visiting both before and after dark for a complete experience. The lighting after dark is gorgeous and the sight of fireworks over the spires of Batuu is something to behold.

Disney will offer a cruise-style 2-night immersive itinerary at Star Wars: Galaxy’s Edge starting in 2021. After you arrive at the Galactic Starcruiser terminal, you’ll enter a launch pod to travel to the Halcyon starcruiser. The viewports will make you feel like you’re traveling through space and approaching a massive ship. Included in your itinerary is the Black Spire Outpost, where a special transport ship will take you to the planet Batuu, from where you will continue exploring and evolving your own Star Wars story.

There’s no additional charge to go to Galaxy’s Edge at Walt Disney World Florida or Disneyland California. However, since the land is extremely popular, you’ll have to join boarding groups for some of the attractions and make reservations for others. Now that you know what to expect, all that’s left to do is go out there and enjoy the amazing experiences at Star Wars: Galaxy’s Edge.