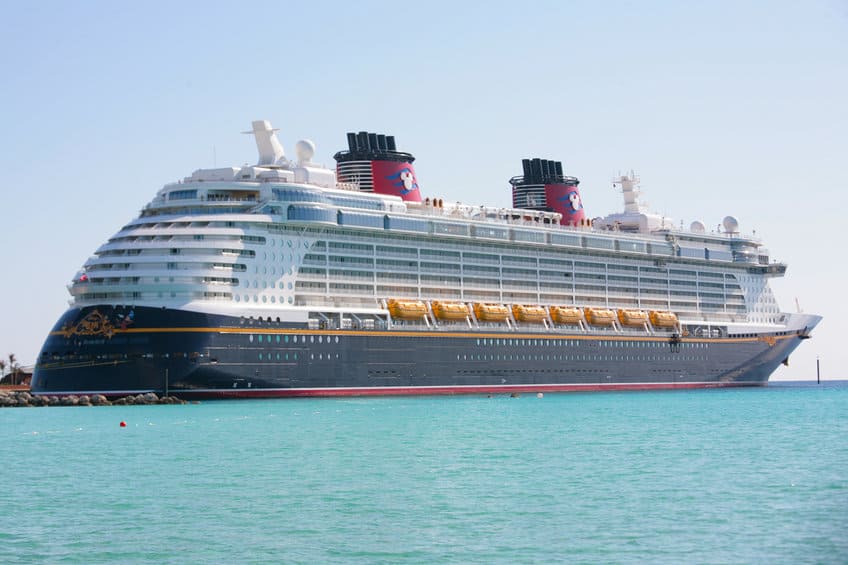 Take the fun you have at Disney World and add to it spectacular ocean views, world-class entertainment, delicious all-you-can-eat dining, and amazing destinations around the world. Voila! You’ve got yourself a Disney cruise. It’s the perfect way for couples, young families, tweens, and teens to enjoy the Disney vacation of a lifetime. But how much does a Disney cruise cost?

Disney is a premium brand in the world of cruising with an expansive range of activities and attractions onboard. The bad news first – Disney cruises are some of the most expensive cruises in the market. The average cost of a Disney cruise can range anywhere from $175 per person per night to $600 per person per night, depending on the ship, the cabin type, the travel period, and the destination. Themed or holiday cruises such as Halloween on the High Seas, Very Merrytime, and Star Wars Day at Sea are typically more expensive.

How much does it cost to go on a Disney cruise?

Prices can vary greatly depending on the number of guests, the cabin type, which Disney cruise ship you’re going on, the travel period, and the destination. The average cost of a Disney cruise ranges from $675 per person to $2,250 per person for 4 nights.

For example, you might pay $1,350 for 2 adults in an inside cabin for a 4-night Bahamas Halloween cruise from Miami on Disney Magic. If 2 adults and 2 children (under age 17) share the room, the Disney cruise price is $2,300 for this same itinerary. Meaning, the cost comes down from $675 per person to $575 per person for the 4-night cruise.

Now, a similar 4-day Bahamas Disney cruise itinerary on a bigger and newer ship, the Disney Dream, can be significantly more expensive. For October dates, you might pay $2,350 for 2 adults in an inside cabin for a 4-night Bahamas jaunt. That’s a whole 1,000 bucks more than the Disney Magic!

How much is a Disney cruise for a family of 4?

A family of 4 can save money on a Disney cruise by staying in the same cabin. As mentioned, the per person price comes down if more people stay in the same room. Also, longer cruises tend to work out to a lower per day price than shorter ones.

An 8-night Eastern Caribbean cruise from Port Canaveral on Disney Fantasy over Halloween is $4,100 for 2 adults. The same cruise with 2 adults and 2 children under 17 sharing an inside cabin is $6,750. This means a family of 4 can go on a Disney Cruise for around $200 per person per night. This is in contrast to $250 per person per night if only 2 adults are going.

How much is a Disney cruise per person?

What is the cheapest month to take a Disney cruise?

For instance, we found a 4-night Western Caribbean cruise from Galveston on the Disney Wonder at $2,975 for 2 adults in an inside cabin sailing just after Christmas on December 27 this year. The same Disney cruise ship with the same itinerary for the same number of people costs roughly $1,750 for a sailing just a couple of weeks later on January 10 early next year.

Why are Disney cruises so expensive?

If you compare prices for any of the popular cruise lines like Royal Caribbean, Holland America, Norwegian Cruise Line, or Carnival with Disney cruise prices, you’ll be surprised to see how much more expensive Disney cruises can be. There are a couple of reasons for this.

One is branding. Disney is a premium brand that offers an exceptional cruise experience to guests of all ages. The Disney brand is well-known and beloved and people are more than willing to shell out extra bucks for the Disney experience.

The other reason is demand and supply. While a cruise line like Royal Caribbean has around 25 ships, Disney has only 4 (with two more coming soon). Also, some of the Disney cruise ships are smaller, meaning there’s great demand for Disney cruises, which drives prices up.

Is a Disney cruise worth the money?

Whether or not a Disney cruise is worth it for your family depends on your budget and how much your family enjoys the Disney experience in general.

Now, the cons. Other cruise lines besides Disney are more likely to have a larger roster of destinations and itineraries with year-round sailings from North American homeports. You can take your pick of sailings to the Caribbean, Mexico, and Alaska or head to more exotic destinations like Asia, South America, Europe, and Australia. While Disney does have worldwide itineraries, you won’t have as much choice.

It boils down to this. The extra cost of a Disney cruise is worth it if you really enjoy the Disney experience. If on the other hand, you want casinos, flexible dining, and more adult-oriented entertainment and activities, then a Disney cruise might not be worth it for you.

Can adults have fun on a Disney cruise?

Yes, absolutely. Disney cruise ships have many areas reserved for adults. There are stylish bars and lounges, adult-oriented entertainment, and more, enough to keep the over-18s happy.

Now that you know the approximate cost of a Disney cruise, are you tempted to book one right away? Let us know in the comments if you’ve been on a Disney cruise or are planning to go on one soon. How much did the Disney cruise cost? And was it worth it?