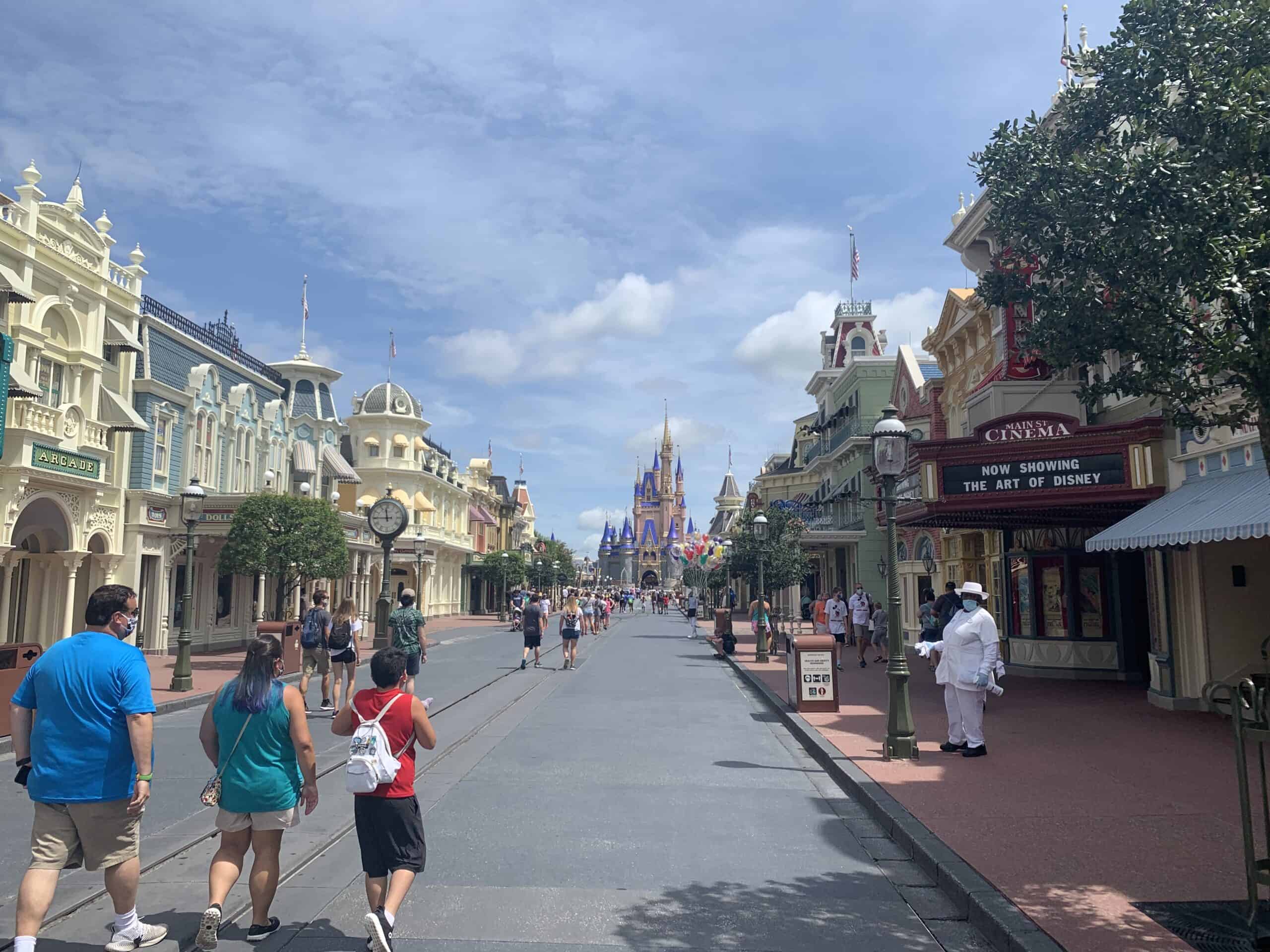 Disneyland California and the Walt Disney World Resort in Orlando are two of the most popular theme parks in the world. Not surprisingly, many people want to celebrate special occasions here. Some people with deep pockets might even be dreaming of renting Disneyland or Disney World completely for themselves.

So, how much does it cost to rent Disney World or Disneyland? Is it even possible? Can you rent an entire Disney park?

The answer is NO.

Even if you are a billionaire, you can’t rent WDW or Disneyland. It is not about the money. It is a logistical nightmare for Disney to close down a single Disney park, let alone the whole of Walt Disney World Resort.

But it is possible to have memorable celebrations in the Disney parks. Keep reading to find out how to have a private celebration at one of Disney’s theme parks or a Disney resort. If the price of one-day Disneyland tickets is any indication, you can be sure it’s not going to be easy on your pocket.

How Much Does It Cost To Rent Out Disneyland For A Day?

For the sake of discussion, it is estimated that Disney makes $6-$10 million at Disneyland every day.

So, theoretically speaking, this is how much it would take to rent Disneyland for yourself.

This does not include earnings from shops and restaurants in Downtown Disney.

And of course, daily collections depend on footfalls and operating hours (weekends are busier and bring in more cash).

Can You Rent Out Disneyland Or Disney World?

Unfortunately, renting out the entire Disneyland or Disney World is impossible. You can’t even rent one Disney park, let alone all of them.

If you have the financial means, you might want to have Disneyland or Disney World all to yourself for your friends and family. You might even offer Disney twice what they make every day.

But, as mentioned, the price of renting Disneyland is not about the money but about logistics.

Shutting down Disneyland California, Downtown Disney, Disney Springs, or even one theme park in Disney World Orlando is out of the question. Turning away the public would be a logistical and public relations nightmare.

Disney vacations are not cheap. When you add up the price of tickets, hotel, and food, you are looking at thousands of dollars. Many families plan and save for months, even years, to make it affordable to take the kids to Disney.

So, even if it were profitable for Disney, it would not be worth putting so many other guests at an inconvenience for a handful of rich folks.

The only theme park rental that has taken place in recent years was when Travis Scott and Kylie Jenner rented the whole of Six Flags for an hour at a cost of $100,000. Nothing similar has been done at any of the Disney Parks which are open year-round to the public.

How Much Would It Cost to Rent the Entire Walt Disney World Resort?

It is estimated that Disney World shutting down during lockdown in the COVID-19 pandemic cost them $20 million a day. This is what the park makes in a day. So, it would be the approximate price to rent Disney World for a day.

Again, it is more than money.

The WDW Resort is twice the size of Manhattan. It consists of 4 theme parks, 2 water parks, dozens of resort hotels, and hundreds of restaurants, shops, and recreational facilities. I can’t think of even one person who would want to do it anyway.

With that said, there is some good news. You can rent out parts of Disney World or Disneyland after hours for special and momentous celebrations.

How Much Does It Cost to Rent Out Disney World After Hours?

Nobody has rented the entire Disney World after hours. It’s not even possible to rent an entire park, let alone all of Disney World.

Nobody knows how much you would pay to rent an entire park for the whole day since it has never been done.

But celebrities have had private events that indicate the average cost of such extravaganzas.

In 2013, a Saudi Prince paid €15 million to host a private event called Disney Dreamers.
This was a three-day extravaganza for 60 guests held in the Disney theme park in California, Tokyo, and Florida.

The private parties were held early in the morning before the parks opened and late at night after the other guests had left.

Can You Rent Out Parts of the Park?

Yes, you can host special events, parties, and weddings at Disneyland and Disney World in a specific area after operational hours. The price will depend on availability, number of guests, and a lot of other factors.

Some people estimate that renting out one ride or one of the popular attractions is $50,000 for four hours.

Renting an entire area like Downtown Disney or Adventure Land for an entire day will carry a price tag of around $250,000 for four hours.

But these are just estimates.

There’s also a bedroom suite atop Cinderella’s Castle, which is actually free.

Yes, it costs nothing to stay at the Cinderella Castle Suite. But before you get excited… Overnight stays in this suite are by invitation only.

How to get an invitation? Nobody knows. One source says Disney has turned down offers of up to $40,000 for a single night.

Can You Get Married at Disney World or Disneyland?

Yes, both Disney World and Disneyland offer packages for people who want a fairy tale wedding inside a Disney park.

You can also celebrate birthdays, anniversaries, or graduations.

The only way to do this, however, is to have your celebration outside of regular park hours, i.e., before 8 AM or after 10 PM. You can only have these events from Mondays to Thursdays.

Also, you may need to book up to six months in advance.

With prices starting at $6,500 for 18 guests for the Escape Collection, Disney weddings are not cheap. This price includes the basics like an officiant, two-tier cake, and 3-course meal for the guests.

There is an extra cost for flowers, entertainment, and Disney character visits.

If you’ve got the financial means, you can have a true fairy tale wedding at the Magic Kingdom Park. This means you get to say your vows in front of Cinderella’s Castle! Sounds dreamy, if you ask me.

Plus there is a horse-drawn carriage ride, fireworks, and a magical candlelight dinner in Fantasyland in the Magic Kingdom theme park.

If you’re on a smaller budget and still dream of a Disney wedding, a ceremony and reception at a Disney resort may be ideal. For instance, the cost of a wedding at Disney’s Grand Floridian Resort and Spa in Florida ranges from $10,000 to $35,000.

In California, the wedding venue fee at Disneyland Resort hotels starts at $10,000.

Weddings inside Disneyland (in the forecourt of Sleeping Beauty’s Castle, for example) or at Magic Kingdom Park in Orlando are highly customized with no fixed pricing.

Has Anyone Rented Disneyland For A Day?

In the 1990s, British-American actress Elizabeth Taylor had a private birthday party for her 60th at Disneyland that reportedly cost her $8,000 ($15,000 in today’s money).

Sounds like a good deal to rent the entire Disneyland park after hours!

For most of us, WDW and Disneyland’s crowds and lines during normal operating hours are a reality we cannot escape. The cost to rent Disneyland or Disney World is not only prohibitive but also a dream.

But the most magical place on earth can make for a memorable vacation even if you don’t have it all to yourself.

Just book your tickets in advance, make a reservation for any must-do ride or attraction at your favorite Disney theme park, visit during the holidays to enjoy the decorations, and come back with memories that will last a lifetime.