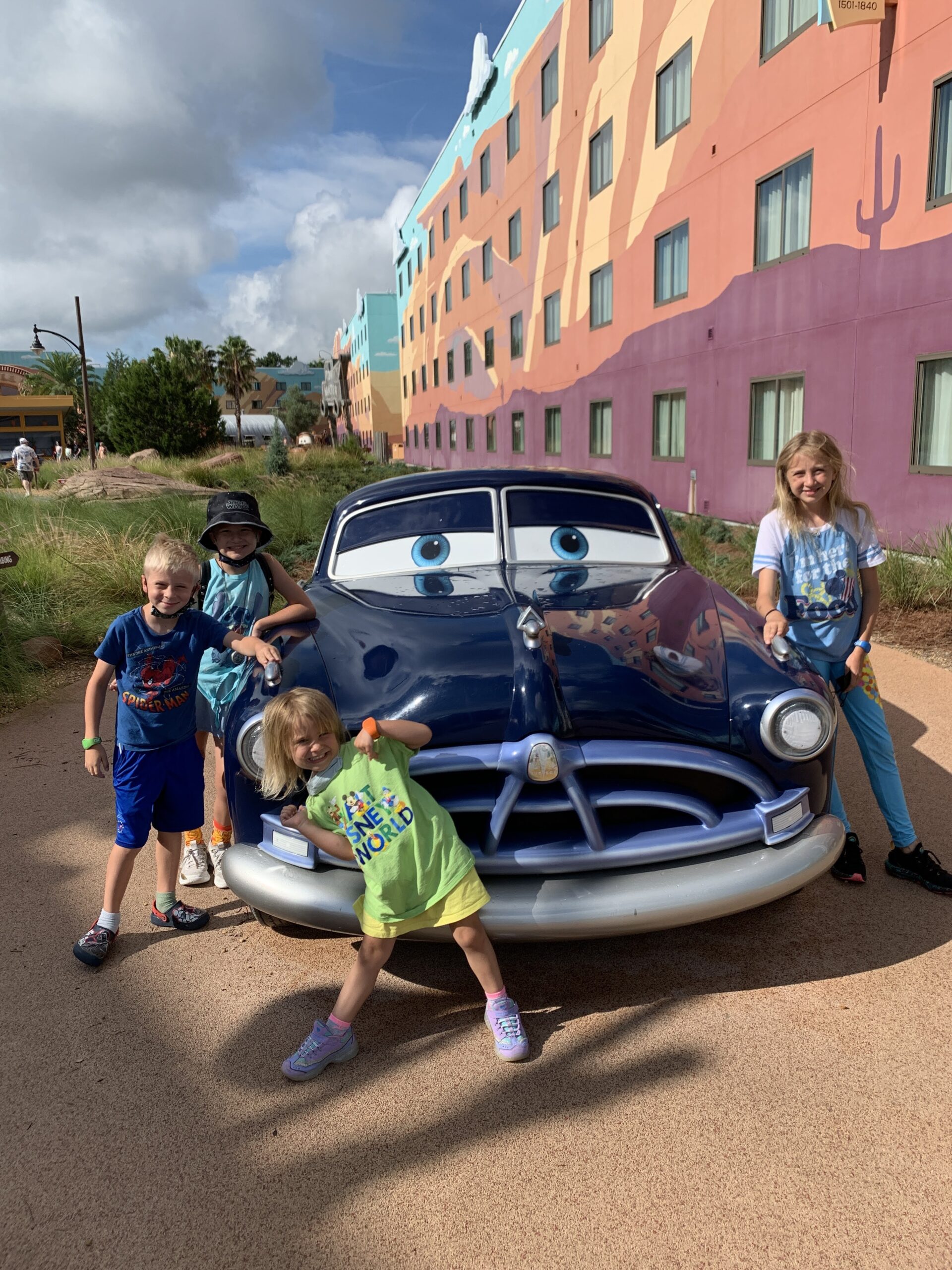 Take a hot-shot racecar called Lightning McQueen. Sprinkle some Disney magic dust on it. Write a story about finding the true meaning of friendship. Bingo! You’ve got yourself a blockbuster movie called Cars. This multi-award-winning film prompted two sequels due to its mind-boggling popularity. It continues to be a much beloved Disney movie that has stood the test of time. So, is there a Cars Land at Walt Disney World?

Unfortunately, no, there is no Cars Land at Disney World. Despite its sustained popularity, Disney has not developed a dedicated Cars area in any of the four Disney World theme parks in Orlando, Florida.

As mentioned, there is no Cars Land at Disney World. Meaning, there is no area devoted solely to the Cars movies at the Disney theme parks in Orlando. However, there is a Cars Land at Disney’s California Adventure Park on the West Coast. This is a themed area inspired by the Disney-Pixar films. It opened in 2012 and sits on around 12 acres of land. The design of Cars Land replicates Radiator Springs, the fictional town in which the events of the first film take place.

There are 3 rides in Cars Land at Disney’s California Adventure Park. Radiator Springs Racers is designed something like the Test Track at Epcot. Guests board a six-person vehicle and wind through mountainous terrain with scenes reminiscent of Radiator Springs. The action then picks up as the vehicles stop side by side and the race begins. With hairpin bends and acceleration along steep banks, it’s a wild ride and tons of fun.

The second ride at Cars Land in Disney’s California Adventure Park is Mater’s Junkyard Jamboree. Guests board mini tractors and are whipped around to playful music. A similar ride at Walt Disney World Florida is the Alien Swirling Saucers at Toy Story Land in Disney’s Hollywood Studios.

The third ride in Cars Land in California is Luigi’s Rollickin’ Roadsters. Guests ride spinning vehicles on a trackless system with Italian music playing in the background.

Of course, there are themed restaurants and shops in Cars Land. And like all Disney parks, you’ll have the chance to meet beloved characters like Lightning McQueen, DJ, Cruz Ramirez, and Red.

Does Disney World have Radiator Springs?

While there is no Cars Land at Disney World, there is an entire section devoted to Radiator Springs at Disney’s Art of Animation Resort in Orlando. In this themed area, you feel like you’ve stepped inside Radiator Springs, the wonderful fictional town that was the setting of the first Cars movie.

The Cars courtyard at Disney’s Art of Animation Resort can be accessed by walking straight through the lobby and turning right onto Route 66. A winding path with beautiful views of the desert landscape will take you right into Ornament Valley and the amazing town of Radiator Springs.

You’ll recognize many shops from the Cars films, including Sally’s Cozy Cone Motel, the Wheel Well Motel, and Tow Mater’s Tow and Salvage. And waiting to greet you will be some iconic Cars characters including Lightning McQueen, Luigi, Doc Hudson, Ramone, Sally, Mater, Guido and Fillmore.

You can take immersion in Cars to the next level by staying at a themed room at Disney World. The family suites in the Cars wing at Disney’s Art of Animation Resort in Disney World are perfect for families who love Cars. These suites can accommodate up to six guests in three sleeping areas.

Everything in these suites, from the lamps to the kitchenette, are themed around the movie Cars. Even the floor has black and white stripes to look like a road. The breakfast table features signs from Radiator Springs. Side tables are designed like tool carts. The living room has a 50’s style convertible car bench for a sofa. And, of course, the sofa converts to a bed. Keeping with the retro décor, there’s a map of Route 66 with Radiator Springs marked on it.

The curtains have a subtle traffic-cones print. And when you step into the kitchenette, you’ll feel like you’re in an auto repair shop. From the carwash sign above the bathroom mirror to the shower curtain painted with Lightning McQueen sprays, the attention to detail is enormous, in typical Disney style. What we loved most, however, were the traffic cone lamp shades that can be turned on and off with a foot pedal on the floor.

Can you meet Lightning McQueen at Disney World?

You don’t have to go to Disney’s California Adventure Park to meet the stars from the Cars movies. You can meet them right here in Orlando. The best place to meet Cars characters in Florida is Disney’s Hollywood Studios.

The Lightning McQueen’s Racing Academy is an attraction located on Sunset Boulevard at Disney’s Hollywood Studios. This is a pumping, action-packed show that puts you smack bang in the middle of the Cars universe. Guests get to see first hand what it takes to become a champion racer. Lightning demonstrates some nifty moves on a racing simulator with a wraparound screen. Of course, things don’t go according to plan. But with the entire gang from Radiator Springs rooting for him, Lightning takes on the challenge and emerges victorious. This attraction is suitable for guests of all ages and any height.

Another great place to get your fix of Cars is at Pixar Place in Hollywood Studios. Here, you can meet Cruz Ramirez and other favorites at a meet and greet with Cars characters.

If you want to experience the thrill of racing cars, then head over to the Test Track at Epcot. It’s the perfect ride for Cars fans at Disney World.

Here are some ideas for a Cars themed vacation at Disney World:

So, while there is no Cars Land at Walt Disney World, there are certainly many ways for Cars fans to immerse themselves in this beloved movie. From staying in a Cars themed room to racing a car on a racetrack, watching shows with Cars characters, and posing for pictures with Lightning McQueen, Disney World will not disappoint any die-hard Cars fan. And if you must visit a Cars Land, head over to the West Coast and you’ll find it at Disney’s California Adventure Park.

The Jambo House is housed on the grounds of the Animal Kingdom Lodge at Disney World. The villas are in the Deluxe category of accommodations, and they offer spectacular views of lush savannas...