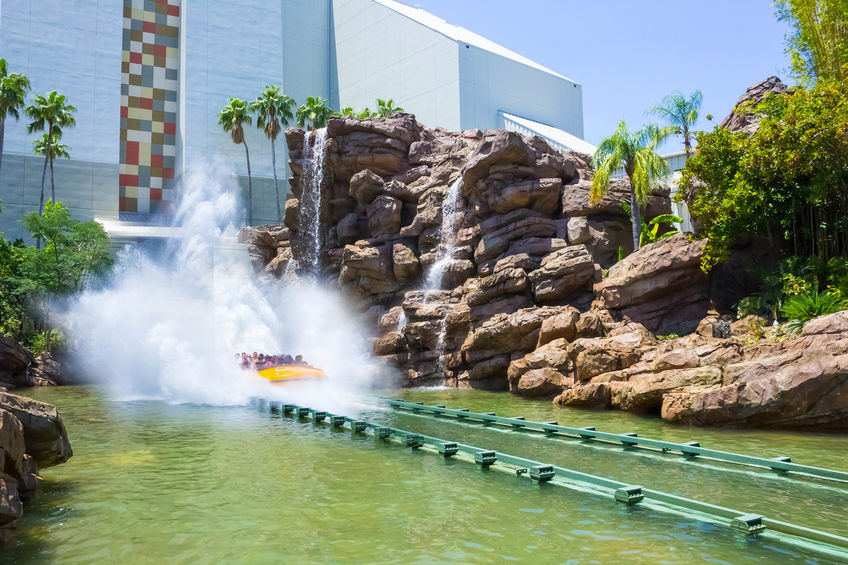 Jurassic Park River Adventure is the best thrill ride in the Jurassic Park area but arguably at Universal Studios itself.

So get ready to experience the Jurassic Park water ride at Universal Studios Florida. You’ll get all the insights and information here.

The Jurassic Park River Adventure opened when the first installment of the series was still in production. It’s very first home was at Universal Studios Hollywood where it was opened to the public on 21st of June, 1996. It proved to be such a big hit, especially after the successful run of the movie, that duplicates of the ride were constructed at Florida, Singapore, and Japan. It gives you a real taste of the famous Isla Nublar Island and truly makes you feel like a part of the lost world.

Here is everything you need to know about this ride.

Your kid needs to be at least 42 inches tall to go with you on the Jurassic Park Ride Adventure. Those who are 42-48 inches tall need to be accompanied by an adult and can’t go on the ride alone.

The length of the Jurassic Park River Adventure is 1900 ft. It goes at a speed of 80km/h, and the duration of the ride is 7 minutes and 19 seconds.

There is water everywhere! 1.5 million gallons of water is used in the Jurassic Park River Adventure. Brace yourselves to get soaking wet with water descent and splashes throughout this water-based amusement ride.

Typical wait time for the Jurassic Park Adventure Ride is 45 minutes. You can use the Universal Express, Child Swap and Single Rider services at the Jurassic Park ride. These can come in handy during peak hours under the hot Florida sun!

What to Expect on the Jurassic Park River Adventure

The ride is designed to capture the beauty and atmosphere of the beloved Isla Nublar. The ride starts with a small elevation followed by a plunge that won’t get much water splashing on you. The iconic Jurassic Park sign welcomes you. The wooden doors open to the beautiful island with the theme music playing at the back to give you goosebumps and make you nostalgic and excited for the ride ahead.

The first area to explore is the Ultrasaurus Lagoon. A large, fully grown model of Ultrasaurus is seen raising its neck from the river high above the rider’s boats and then gradually lowering it back and going about its day. These dinosaurs are quite friendly, and as they are herbivores, you have nothing to fear! Two psittacosauruses are also seen drinking and eating the leaves nearby in the Lagoon. The boat then passes through a dark cave with water trickling down at both ends of it. The beautiful rocks, flowing rivers and caves with dinosaur roars give you the feel of prehistoric times and encapsulate the beauty of Jurassic Park.

The next area of exploration is the Stegosaurus Spring. You will find eruptions of hot water springs that can splash on you and make you lightly wet. It is a volcanic area of the tour, staying true to the Stegosaur South description in the novel. A fully grown Stegosaurus is seen on one side of the river, gigantically towering over the boat. On the other side, a smaller Stegosaurus is standing to welcome the riders.

The boat now begins to make its way towards the Hadrosaur Cove part of the Jurassic Park River Adventure. A mischievous Parasaurolophus lifts its head from the water to spray water at the riders from its nostrils. Moments later, another Parasaurolophus emerges from the water. The startled and confused creature bumps the boat into a dangerous and forbidden area of the Isla Nublar.

This area of the Jurassic Park ride is shown to be irreparably damaged by the ill-behaved raptors on the loose. The riders are warned to remain seated as this part of the exploration was unplanned. The jungle area has raptors all around, rustling the plants and bushes around. The Raptor Pen area is constructed to resemble the one in the movie, with snarling Velociraptors growling in the thick shrubbery and making attempts to escape.

You’ll also see two Compsognathus fighting over a torn and bloody crew shirt. The boat heads towards the water treatment plant with a Velociraptor running on one side. A large shaking crate almost crushes the riders as they make their way through from under it.

The boat heads up to a dark and silent building. The dark tunnel has several severed pipes, and you can see shadows of raptors on the walls. Raptors are also jumping out of dark corners and control panels to snarl at the riders. After a short drop, sirens are heard amidst Dilophosaurus squeals and snarls as they shoot venom (water) at the riders. The tension is built with sizeable three-fingered claw marks ripping through the wall.

Finally, the moment of the ultimate face-off with the T-Rex comes, where the riders escape its attack at the last moment by fleeing through a plunging drop.

How tall is the drop on Jurassic Park River Adventure?

The main drop is just at the end of the ride which is a whopping 85-foot plunge at 51 degrees drop!

When the ride opened, it was the largest water descent ever constructed in a theme park. You might want to hide away your cameras and essentials at this point if you don’t want them to get soaking wet and damaged.

There are few drops and plunges along the ride that aren’t too splashy.

Do you get wet on Jurassic Park River Adventure?

Yes, you definitely can get wet on the Jurassic Park River Adventure. If you are in the front prepare to get soaked in fact store anything you don’t want wet in the lockers or give them to someone else while you ride.

No. The Jurrasic Park ride closed a few months ago to be changed into the Jurrasic World Ride but the Jurassic Park River Adventure has no current plans to close.

The Jurassic Park River Adventure is an immersive and action-packed ride. It is essentially a water ride so be prepared to get soaking wet. Those who choose to sit in the front row get the full blow of all the splashes.

It’s recommended not to carry your valuables, instead stow them safely by renting a locker nearby.

You might also want to get ponchos if you don’t wish to change your outfit after the ride. Ponchos are readily available in the shops as the Florida weather is always susceptible to rainfall. You can also plan all water rides at the Islands of Adventures back to back so you can keep your poncho on and even cover them during the rental period of the locker.

Other Water Rides at Universal Orlando You Might Enjoy

The Jurassic Park River Adventure is one of the best water rides to go on at Universal. Water rides are a great way to beat the heat during hot summer months while having the time of your life.

If you are a fan of the Jurassic Park River Adventure ride, you will definitely enjoy the Dudley Do-Right’s Ripsaw Falls and Popeye and Bluto’s Bilge-Rat Barges at Toon Lagoon.

The drenched soak factor alone is worth the wait.