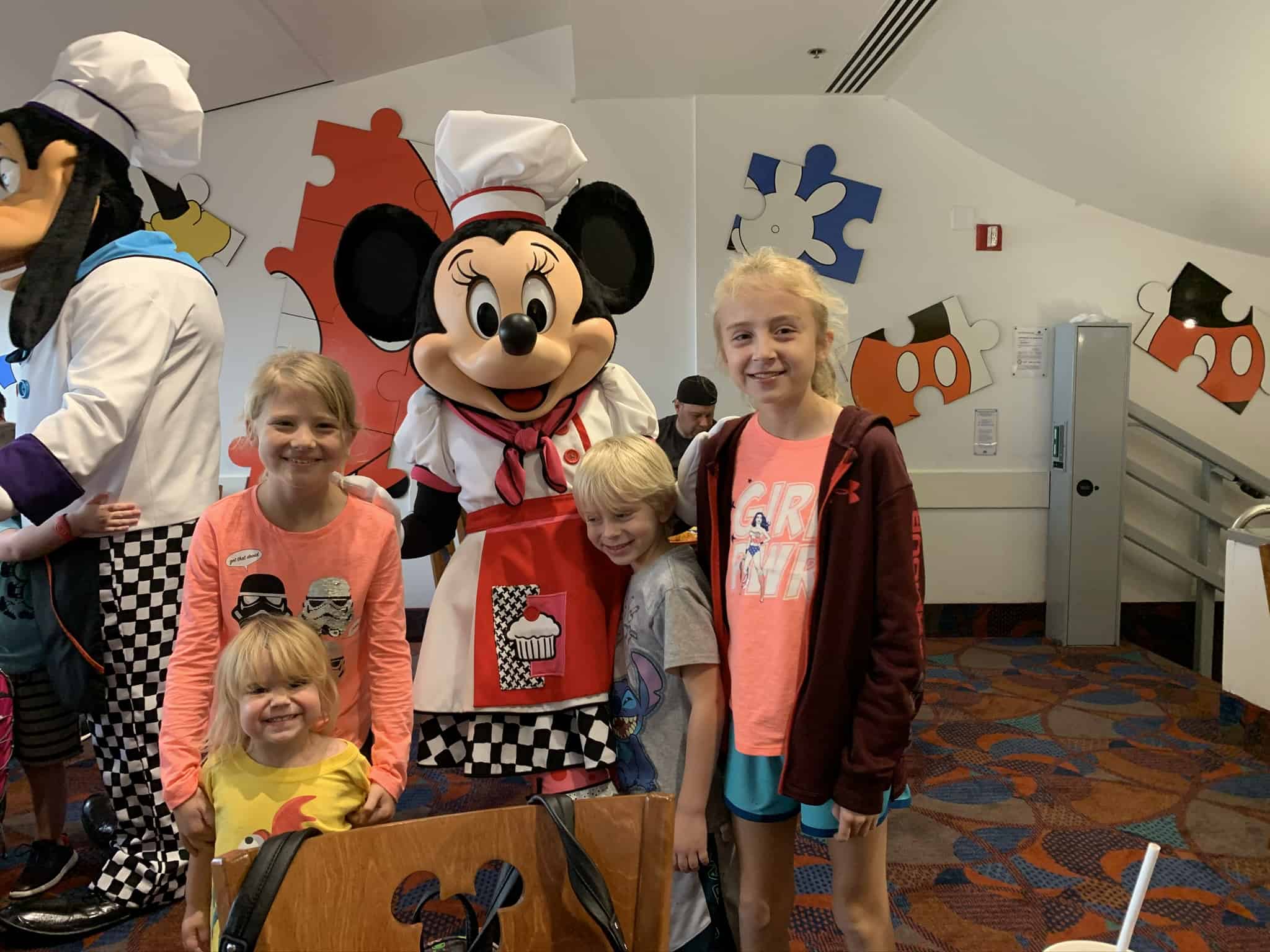 Did you know that Minnie Mouse is a Disney Princesses?   It was Mickey who said so.  “Gee, Minnie, you’ve always been a princess to me.”  That makes her at least an unofficial princess.  And our littlest loves Minnie mouse so she is absolutely a must meet when visiting Disney World. If you’re wondering where you can meet her, use this guide.  We’ll give you all the Minnie-hacks and facts to help you find this cheerful mouse!

Where can I meet Minnie Mouse?  Not only can you meet her in several locations in both Disney World and Disney Land, but she also appears frequently at other Disney properties outside of the parks.

These are the locations at Disney World where you can find her:

We will give you all the instructions, details, height requirements, and wardrobe secrets so you know exactly what to expect at each location.

Where Can I Meet Minnie Mouse?

Children and grown-ups alike fall in love with the magic that is Disney World and Land. This guide will help you outline a game-plan for your visit to avoid wandering around aimlessly with Minnie-expectant kiddos!

Some quick fun facts and ideas to ask her about when you come face to face with the most adored mouse in the world are:

This is the mouse your kiddos want to meet and take a picture with. The places you can find her are as follows:

Where can I meet Minnie Mouse at Disney World?

When visiting Disney World in Orlando, Florida, there are many locations you can find Minnie at all around the Disney park. Utilize this Digital Map of Disney World and check out these stops:

Here is where you will find Minnie adorning some adventurer clothes and looking very, Indiana Jones! In her straw hat, she will greet families on their animal kingdom day and pose for pictures.

Minnie will appear at Hollywood Studios around the Drive-in Theater as well as for a season stint at the Hollywood & Vine restaurant.

Reservations are not only recommended but should be made far in advance at this indoor restaurant. Many of these families want to meet Minnie as well and it tends to book up 3 to 6 months in advance. Plan accordingly and know that there is no exact time Minnie shows up here, so it may not be the most reliable location if your plans revolve around Minnie.

See Minnie in beach-wear while she gives off ‘surf’s up’ vibes. This is a casual dining location that still books up quite in advance.

If you want a snapshot of Minnie in her classic red and white polka-dotted dress, this is a great spot to capture Minnie with her beau Mickey! This is also our favorite Disney Restaurant and a must-visit every trip.

Magical Kingdom at the Minnie and Pete Silly Sideshow

While visiting with little ones, you have to catch Minnie and Pete’s Silly Sideshow for a clown-like circus performance the whole family will get a laugh out of.

See Minnie in an elaborate pink costume as she sports a feathery headdress that is hilarious.

Epcot at The Character Spot

Another classic Minnie-costume spot to find the original polka-dotted get-up, this will be an indoor environment where the PhotoPass service will be located as well for convenient photo-ops. Currently this is closed and will be updated with the new location.

Event tickets or FastPass+ cards will be required for this one, but the food is delicious if you are craving some southern comfort BBQ!

Minnie will look as precious as a cowgirl in plaid.  The rest of the gang will usually make an appearance!

Other spots that are less regular, less scheduled and regimented, but still frequently visited by Minnie Mouse and the gang are:

This is also held at the Paradise Pier Hotel.  Here the buffet breakfast has a surf’s up theme.

Minnie can be found at the restaurant and also along where the characters partake in a meet ‘n greet commonly along Commissary Lane.

You will see the gang dressed in seasonal attire like costumes for Halloween, sparkling light-up dresses for Christmas, and floral dresses in the spring-time

There are two locations for character meet-ups if (and only if) you have a Disney credit or debit card. You can meet the characters at Epcot and Hollywood Studios for these visa meet-ups.

Any Disney resorts around the Disney locations are a possible time and place to spot a character! There are frequent visits but not constant times or locations.

Another seasonal spot where there’s no pre-determined date or time to see the characters.  However, they love to surprise guests by rolling through and laughing with their fans!

People flock from all around the world because these mischievous little mice warm our hearts and have made us smile since we were little. Disney allows that magic to be passed on for generations, and that’s part of why Minnie and Mickey are two of the most recognizable characters in the Disney franchise.

They are the original two, forging beyond the days of black and white television to the most colorful impact on modern media.

If you don’t know where to look or for exact times, Minnie is often strolling around these locations:

You can also Book a Dining Experience with Minnie! This could be a highlight of the trip for the family. Keep in mind that you’ll be snapping lots of photos, saving yourself the cost of the posed pictures Disney wants you to purchase.

Minnie and Mickey are the ones that started it all with Minnie’s debut dating back to November of 1928! She’s looking pretty good for nearly 100 years old, so be sure to tell her so at one of these many location options to meet the queen mouse herself.

Get that picture, pose with the family hugging the cutest mouse in the world and savor the life-long memories that only the most magical place on earth can give.