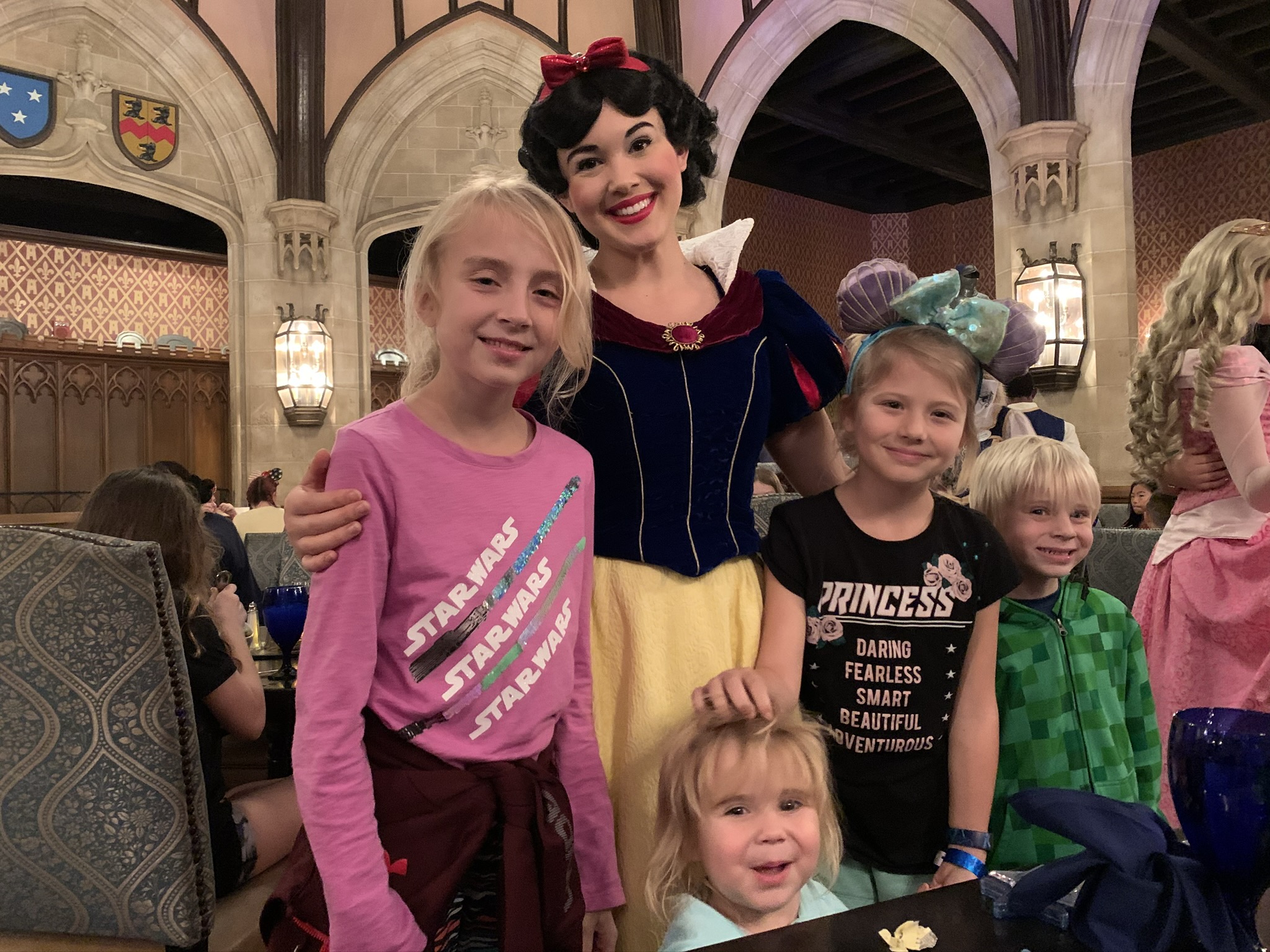 Snow White was the very first of all Disney Princesses and her fans might even insist she is still the fairest of them all. Who can blame them? The very first Disney Princess film by Disney struck the hearts of millions and still do, even to this day. The good news is that her legacy lives on and you can meet and greet Snow White and enjoy variations of her movies even to this day.

Where can I meet Snow White? There are a few places you can meet Snow White including the Disney Wilderness Lodge, the Akershus Royal Banquet Hall and even at the Germany Pavilion. You can also meet Snow White at the Cinderella’s Royal Table Princess Meals, among other locations.

A rather new character dining experience is Disney’s Wilderness Lodge during Storybook Dining. The unique Snow White themed menu has uniquely picked items and includes desserts, entrees, and appetizers. It is a little pricey and you definitely want to try and book it in advance since its rather popular.

Delightful activities and music at the Enchanted Forest will completely entertain kids of all ages.

At times, you can catch Snow White at the Disney Wilderness Lodge during Storybook Dining at Artist Point. This resort features some of the seven dwarves – Grumpy, Dopey, and Snow White, and even encounters with The Wicked Queen.

Often, Snow White makes an appearance among 3 or 4 princesses at the Epcot princess meals. There is a rotating schedule for princesses. This is a popular dining restaurant so you might want to make reservations in advance.

At The Germany Pavilion

Meet and greet Snow White at Epcot’s Germany Pavilion. Get her autograph and your photo was taken when she makes a daily appearance at a variety of times in Epcot’s Germany pavilion. Bring your autograph books if you want to grab an autograph as this is a good location for a photo and autograph.

On the park maps and racks, you can find a time guide for Epcot. This gives you a clue about when Snow White makes an appearance. Usually, she appears for thirty minutes at a time at half-hour intervals starting at 12:30. Lines move slowly so arriving earlier than her schedule will lessen your waiting time.

Members of the cast may cut off extra people who line up late so it’s always a good idea to come early!

Come to the Royal Table Princess Meals and catch the princess line-up which usually includes Snow White. Disney usually does not announce in advance which princesses will be appearing.

However, aside from Cinderella, Snow White does make a frequent appearance here. This is where we saw her and remember to bring your autograph books if you want to collect all the princess signatures.

We had to make reservations months in advance so make sure to think ahead if your interested.

At the Princess Fairytale Hall in the Magic Kingdom

At the Princess Fairytale Hall, you may be able to meet and greet Snow White. You may even get her autograph. Come to Fantasy Land’s Princess Fairytale Hall to meet Snow White. Check to see if she is one of the princesses in the course of your visit. You can get an available Fast Pass for the best results. There is no additional charge as this comes free with admission to the park. Photographers for Photo Pass can take your photo with your camera or as part of the service for Memory Maker. Since every princess in Disney does take their time with every guest, you may go through a long wait. It is much better to have a reservation with Fast Pass.

Meet and greet Prince Charming and Snow White at the Fantasmic evening show of Disney’s Hollywood Studios. The Fantasmic float features this spectacular evening performance you can’t miss the Hollywood Studios park of Disney. This show is sure to impress and is featured almost every evening. Find out all the schedules from the Disney app to make sure you catch the show on your next trip to Disney.

There is a window display of Snow White with moving parts on Main Street USA’s Emporium in the Magic Kingdom. Of course, this may not be the real Snow White but it sure comes close and does provide great photo ops.

Also just hanging around Main Street gives you plenty of parade opportunities to catch a glimpse of Snow White and a bunch of other characters.

Snow White and the Seven Dwarfs make a daily appearance in Magic Kingdom’s Festival of Fantasy Parade. At Magic Kingdom Park, celebrate the Disney spirit as all your favorite Disney characters come alive with dancing and music during the tales of tribute to Fantasy Land. Be a part of this spectacular gala starring Snow White along with all the other Disney characters on state-of-the-art floats. There are stilt-walkers performing in colorful costumes, swinging on pendulums and even a dragon that breathes real fire! The unbridled enhancement and thrilling spectacular parade features original Disney music, motion, and a dazzling mix of floats.

At The New Fantasyland

You will see Snow White at the New Fantasyland of the Magic Kingdom in Seven Dwarfs Mine Train. This project draws some of Magic Kingdom’s longest lines. To ride, you need to be a minimum of thirty-eight inches tall. Head directly to this attraction or get a reservation and a Fast Pass as soon as the park opens so that you don’t have to wait in line.

Often, Snow White appears at Magic Kingdom’s opening show. It is a good idea to get there early before the park opens which usually at 9 in the morning in order to see Snow White during the opening show.

Can I Take a Photo With Snow White

Yes, you can take a photo with Snow White at any of the locations where you are allowed to meet and great. You can even take a photo from afar like in the parades but you obviously won’t be able to get on a parade float and take one “with” her.

Can I Get Snow White’s Autograph?

A common question is whether or not a location is good for getting a character’s autograph. We have found the best luck when trying to get autographs is to go to one of the character meals or to go to the character meetup line.