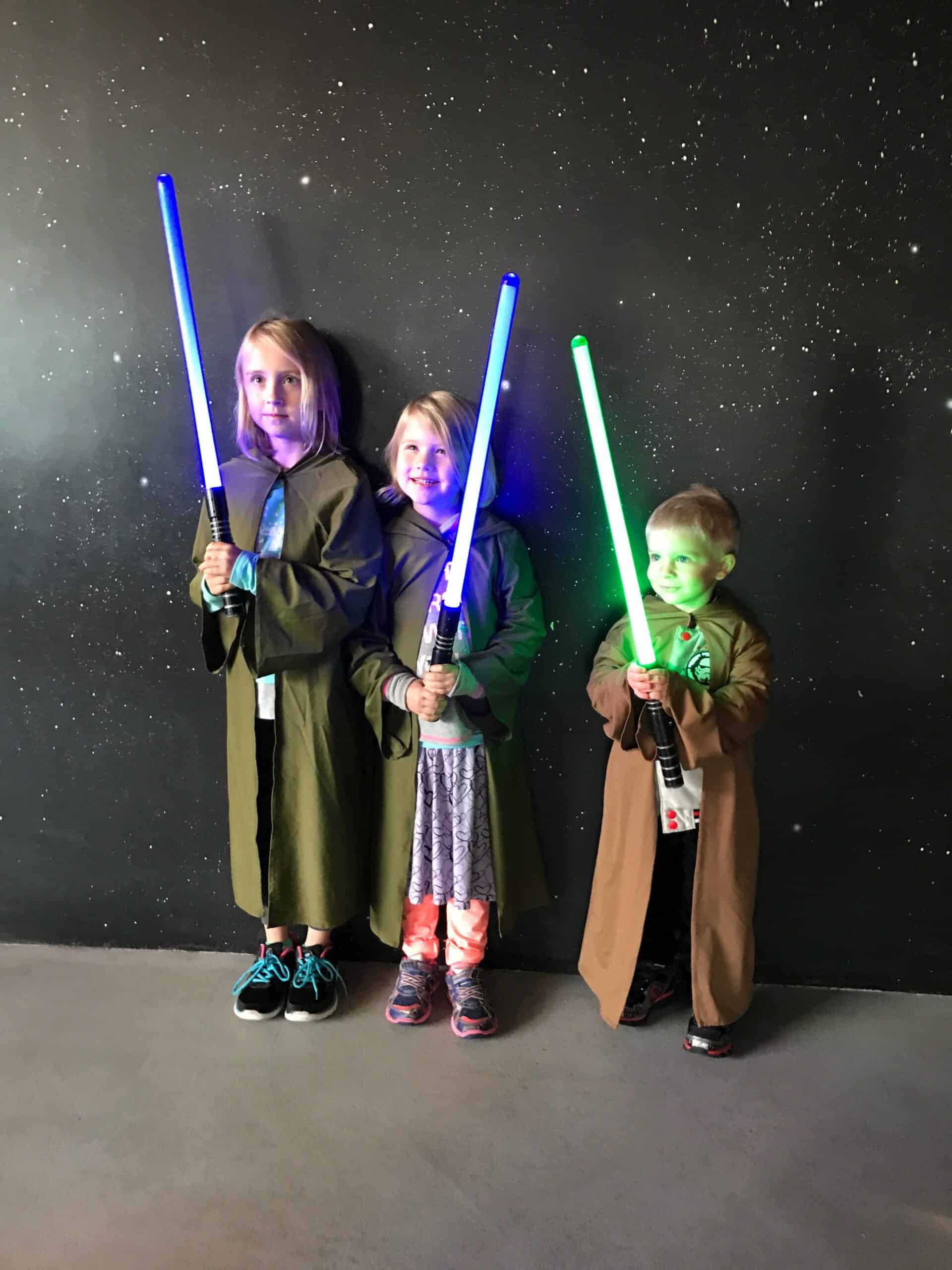 One of the things that can make the Star Wars: Galaxy’s Edge experience extra special and more immersive for you and your family is dressing the part. Choosing to express your affiliation to the First Order or the Resistance in attire from a galaxy far, far away is a befitting way to pay tribute to all your favorite Star Wars characters. But before you go all out and don an out-of-this-world Star Wars costume, keep in mind that Disney has a costume policy in place. So, can you wear Jedi robes in Galaxy’s Edge?

Fans over the age of 14 are not permitted to wear costumes at Disney World theme parks, including Hollywood Studios and Galaxy’s Edge. So, while you can purchase Jedi robes at Galaxy’s Edge, you may not be able to wear them at the park.

Continue reading to find out more about Disney’s costume policy. Learn what you can and cannot wear at Galaxy’s Edge. Also, find out whether cast members strictly enforce the no-robes rule!

Can I wear a costume to Galaxy’s Edge?

Disney parks have had a longstanding no-costume policy for guests over age 14. This is because Disney does not want guests to be confused for cast members who are often in costume. For example, a young child could mistake an adult stranger in costume for a vetted employee.

Perhaps unlike anywhere else in the parks, at Batuu, the Walt Disney World team has given cast members some freedom to express their creativity. They can choose from a variety of tunics, vests, and wraps to create a unique look. This makes it even more difficult to tell the difference between cast members and guests, despite the staff having name tags.

Unfortunately, this means if you are a guest over 14, you are not permitted to wear Jedi robes at Galaxy’s Edge even if you purchase them in the merchandise stores in the park.

What costumes can you wear at Galaxy’s Edge?

While Jedi robes and other costumes are not permitted to be worn by guests 14 years of age or older, Disney does allow bounding outfits. These outfits, inspired by Star Wars, consist of pieces of traditional clothing worn together that are recognizable as a tribute to Star Wars. Batuuan clothing inspired by the villagers, including vests, wraps, and tunics in muted tones and layers, are also permitted. Proper footwear must be worn at all times.

Notably, costumes and masks can be worn by guests 14 years and older during special events, such as Mickey’s Halloween Party, when different costume rules apply.

What can’t you wear to Galaxy’s Edge?

Disney also does not permit military-style attire or any kinds of robes, including Jedi robes, even those purchased at Galaxy’s Edge.

This can be a major disappointment for Star Wars fans. Cosplay is a big part of Star Wars culture. Many people feel that wearing Jedi robes or the costume of a favorite character at Galaxy’s Edge is what makes the whole experience immersive and special. Many folks with full-time jobs say, “Where are we going to wear the Jedi robes if not at Galaxy’s Edge?”

But Disney has a clear policy on this. You cannot don any elaborate Star Wars costumes including Jedi robes in the parks. You can, however, purchase amazingly authentic costumes to wear elsewhere, such as at fan events, comic conventions, charity events, etc.

Children younger than age 13 are welcome to wear costumes at Galaxy’s Edge, including masks. Disney recommends that masks do not obstruct the child’s vision and have openings large enough for the eyes to be visible.

Do cast members enforce the costume policy at Galaxy’s Edge?

Some people have reported that cast members do not heavily enforce the no-robes policy. They’ve worn their Jedi robes all day at Galaxy’s Edge and walked near a lot of cast members, security personnel, managers, etc., without being told to remove them. But other guests report that cast members will politely ask you to remove Jedi robes.

So, if you decide to wear Jedi robes to Galaxy’s Edge, it’s going to depend on your luck, how much mileage you can get out of them before you’re told to take them off.

How much is a Jedi robe at Galaxy’s Edge? What about other Star Wars merchandise?

Galaxy’s Edge is the ultimate Star Wars experience, so if you’re a fan, don’t miss the chance to take home some rare, authentic, and exclusive merchandise. There are six stores in Galaxy’s Edge plus the Droid Depot. Each one is worth browsing even if you don’t end up buying anything. The vibe is less mass-produced gifts and more authentic street vendor.

Some of the cool stuff you can pick up at Galaxy’s Edge includes charming stuffed toys and plushies for younger fans, averaging around $40, justified by the quality. First Order pin badges are collectors’ favorites and cost $9.99 and up. We loved the ones in the red, black, and silver color schemes. Sabacc cards are another popular item and can be played by 2-8 persons – the box comes with game instructions. Die-cast Resistance vehicle models start at $14.99 and are incredibly detailed and intricate. Legacy lightsabers are bestsellers at Galaxy’s Edge and are by far the highest quality replicas we’ve seen, starting at $109.99.

Last but not least, Sith and Jedi robes are available at Black Spire Outfitters starting at $49.99 for child sizes and $124.99 for adult sizes. Adults can purchase the complete traditional outfit of a Jedi or Sith including the under-tunic, over-tunic, and robe. The whole set costs around $250 (the material quality and colors are amazing).

How to dress the part for Galaxy’s Edge without busting the bank?

While you cannot wear Jedi robes at Galaxy’s Edge, it doesn’t mean you can’t dress the part. Whether you’re a villager, a smuggler, or a member of the First Order or the Resistance, you can enjoy a more immersive experience without shelling out big bucks and without breaking Disney’s costume rules.

To look like a resident of a galaxy far, far away, choose a muted color palette with earthy tones. Pick natural materials that have a rustic, handmade appearance. Get creative with vests, tunics, and wraps in a style that’s your very own. Just avoid any armor or full character costumes and you should be fine.