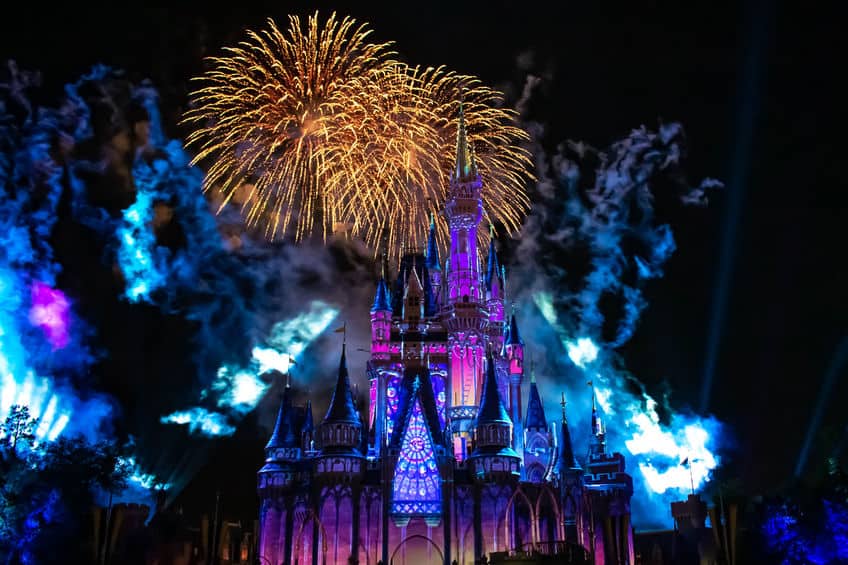 After a long day, nothing quite completes a trip to Disney World like seeing fireworks. It is one of the more spectacular events held every day at the parks, entertaining people of all ages as the perfect ending to the day. Fireworks are a staple at Disney, but knowing when and where they take place at each park is important. One of my favorite memories is my second daughter on my shoulders watching the show at Hollywood Studios to close down the park.

Does Disney World always have fireworks?

The Magic Kingdom, Epcot, and Hollywood Studios all have fireworks to end every single night. There are some exceptions to the rule (weather, and technical difficulties are the most common), but they try to make sure that the show goes on without a hitch. The Animal Kingdom is the only Disney World park that does not have fireworks, due to safety and quality of life concerns for the animals.

What to expect at the fireworks shows at Disney World?

If fireworks are very important, it makes sense to do some research to see which has the best show. People may only have limited time at the parks, so they want to be at the right spot at night.

Happily Ever After – Magic Kingdom

The most famous firework show at Disney World has to be Happily Ever After at the Magic Kingdom. It is an 18-minute show that not only features fireworks, but lasers, lights, and other projections to bring a day at the park together. It is something Disney World takes a lot of pride in, and has become a true feature for anyone to experience at least once.

If there is only time to have one night at Disney World, this is the place to be. The fireworks are a little bit better than the other parks, but it is the extras that put it over the top. A total of 25 Disney films are represented during the show, as iconic characters and scenes are flashed on the projection system at Cinderella’s Castle. The setting itself is truly remarkable, and it can be viewed from many different angles around the park.

Get as close as possible to the castle

The new projection screen is really big, but it is still hard to see from a distance. With so much of a focus on what is projected on that screen, it makes sense for people to try to get as close as possible.

Just like it is important to get close, a centrally located spot is going to cut down any angles when looking at a screen as well. Not only does the show look better, but people have a better opportunity to take photos if that is what they are hoping for.

If prime seating is not the goal, find something to sit or lean on

To be right there in the action, a person can’t really do much about sitting down or leaning up against something. However, if it has already been a long day, seek out a spot that is a little more comfortable for the entire group. This is an 18-minute show, and after hours and hours of walking, people might not be that up to standing without any support.

This new firework show at Hollywood Studios focuses on Star Wars, and is a must for any fan out there wanting to wind down the right way. It lasts 14-minutes and has some fantastic cutting edge technology to bring the entire show to life.

The fireworks are amazing, and what is really impressive is how they turn certain parts of the park into what it looks like in the movie. The show is pretty fast-paced, so even though it is a little long, it does not feel that way. Some might be left wanting to see more, while others are happy that it is fast-paced to keep everything moving.

Since the whole Star Wars connection to Disney is still relatively new, there are a lot of people trying to get those prime spots. Try to get there about 45 minutes to an hour early, especially if this is the first time doing the show. There are enough things in the area for people to stay occupied a bit, so maybe one or two people can hold spots for the rest of the group.

Keep the youngest children in mind

No one is going to call the show scary necessarily, but it might be a little bit too much for younger kids to appreciate. They most likely have not seen Star Wars, and they will be better suited for a family friendly type of fireworks show.

Another new show as far as fireworks are concerned is Epcot Forever. It is considered only an interim replacement at this point, taking the spot for Illuminations: Reflections of Earth. The plan for Epcot is to introduce HarmonioUS in late 2020, but it is unclear if that will be pushed back to any due to the COVID-19 pandemic.

The entire show is based on the history of the park, with many different connections to every place people checked out during the day. Fireworks are shot off the entire time, lighting up the sky and allowing people to really enjoy a beautiful setting over the lake.

Along with the fireworks, there is plenty of special lighting, lasers, special effects, and music from around the park. It is the shortest of the nightly shows, lasting only 12 minutes long.

While a lot of people are looking forward to what the new show will look like once released, it is worth checking out Epcot Forever during the short time. It is only going to be alive for about a year, so anyone who gets the opportunity should take advantage since it will look quite a bit different in a matter of months.

There are a few spots around the park that have food seating with great views of the show. Order food at the right time, and this will be one of the most relaxing ways to watch everything.

Work towards the front for quick exit

A lot of people are very eager to leave once the show is over, but with the show being viewable from everywhere in the park, it can sometimes be a very long walk. If beating the rush is the goal, make sure to get in the right area.

Are there any other special firework shows at Disney World?

At the Magic Kingdom, there are two types of fireworks shows that are available during after hours at certain times of the year. Mickey’s Not So Scary Halloween Party and Mini’s Wonderful Christmatime Fireworks show are both extremely seasonal, and relatively new additions to the parks.

The beauty of both of these shows is that people get a unique opportunity to see something a little bit different to help justify spending extra money for after hour tickets. They are not meant to replace the other firework shows at Magic Kingdom, but more of a bonus to end the night.

How often are fireworks delayed or canceled at Disney World?

Disney World tries to do whatever possible to make sure that fireworks go on as scheduled. Just like any location, there are bound to be bad weather nights, but they will still try to find time to shoot them off and keep everything moving.

If there is just light rain in the area, firework shows will most likely go on without any delay. If the rain becomes a bit heavier, or there is thundering and lightning, this is when they might temporarily delay them to wait for everything to clear up.

When the fireworks are forced to be outright canceled, they will make an announcement as soon as possible throughout the park. The good news for a lot of visitors is that rain is not nearly as frequent at night time in Central Florida. Most of the showers during the summer happen in the middle of the day, which usually leaves for a slightly cooler night in the end. During the winter, it is mostly dry, which makes it ideal for fireworks shows.

What time do the fireworks start at Disney World?

The majority of nightly shows will start around 9 PM on most nights. This gives everyone plenty of time to see everything they want to in the park, and save the fireworks for the end of the day. Even during the longest days as far as daylight is concerned, it is still completely dark in Central Florida at that time.

The hours for after hours fireworks can vary. It all depends on when those hours run on that particular day. They can’t hold them too late, but they are the latest Disney fires off fireworks in the area.

Are the fireworks worth checking out at Disney World?

All three of the big shows at Disney bring something unique to the table. The Magic Kingdom, generally speaking, has the most iconic show, and that makes sense since it is the most popular park. As long as the group has the energy, the shows are all a great end to a day.

Disney World has spent a lot of time and money to make sure that people get a great fireworks show at all three parks every single night. There will always be groups that are a bit too tired out to make it to the fireworks, but it is always worth staying as long as the weather is great. Even people who have seen the show before will find fireworks to be one of the more satisfying ways to end the night.