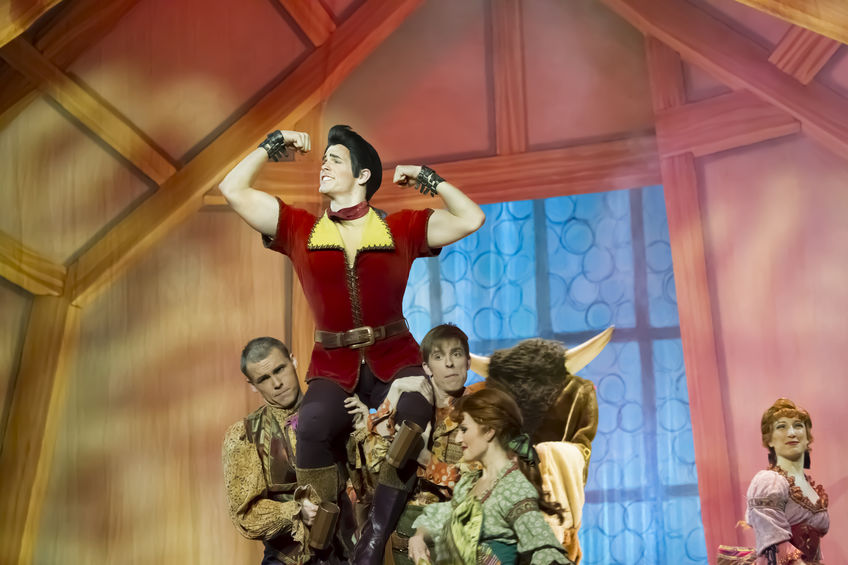 You’ve planned your trip to Walt Disney World and your kids have set their hearts on meeting the one and only Gaston. Where can you find him? Fantasyland at Disney World is the place to meet Gaston, right next to his own Gaston’s Tavern. Belle’s would-be husband from Beauty and the Beast is ready to make your children’s dreams come true.

I’ll never forget the sparkle in his eye when my little boy met Mickey Mouse for the first time; he could hardly speak as he was so mesmerized! Meeting a Disney character in real life makes magical memories that last a lifetime, for parents and children.

Meeting Gaston makes you feel like you are really part of Beauty and the Beast. Despite being turned down by Belle, Gaston has recovered and is enjoying his celebrity status in the village. It’s probably best not to mention Belle, though, as we don’t want to remind him of his lost chance of love. Still, he has plenty of womenfolk who adore him in his tavern, and he enjoys receiving as much attention as he can.

The full list of locations that you can meet Gaston is here:

Where can guests meet Gaston?

Gaston is usually inside his Tavern a beautiful eaterie straight out of a storybook. Decorated with tips from Gaston himself, including lots of antlers on the walls, the tavern is a great place to help you feel you are really a part of the village behind the Beast’s Castle. Gaston will happily chat about himself and his hunting honors. He will post for photos and tell you all about his latest exploits.

He flexes his muscles and admires his own reflection in his own tavern, where the local village folk, and the public, adore him! Gaston is even more handsome in real life than in the film, and his huge muscles are as impressive as his stories of daring deeds.

What Disney Park is Gaston’s Tavern in?

Gaston’s Tavern is inside the Magic Kingdom. Towards the back by the carousel in the Fantasyland area.

While you can see Gaston in a few different locations like the parade his Tavern is the most common.

Another great location to watch Gaston is in Hollywood Studios at the Beauty and the Beast show. This isn’t as personal as the meet and greet at the Magic Kingdom but a good option nonetheless.

Can You Get the Grey stuff at Gaston’s Tavern?

For awhile you could get a grey stuff cupcake at Gaston’s Tavern, but sadly you cannot right now. But you can get the grey stuff at Be Our Guest if you are lucky enough to get a reservation.

What section of the Magic Kingdom is Gaston in?

Gaston’s Tavern is inside Fantasyland in the Magic Kingdom.

There might be queues to meet Gaston, so it is worth aiming to arrive at the tavern a little earlier than the scheduled time. Don’t worry, though, as Gaston will stay until the last children have been seen and will still make sure he spends time chatting as well as posing for photographs. It is not only children who love Gaston, quite often, moms enjoy having their photo taken with the handsome charmer. Gaston loves to spend time with people who appreciate his good looks and manly qualities, whatever their age!

What Time is Gaston Available for a Character Meet?

He is usually available between 10 am and 5 pm.

Gaston appears several times during the day and you can usually find a list of the exact times when you can find him so that you can plan the rest of your day.

TIP: Don’t forget to take an autograph book or poster for him to sign.

Is There a Fastpass for Gaston?

No, there is no Fastpass for Gaston. This is somewhat of a bummer because you can’t guaruntee you get to see him. However, the lines and wait for Gaston isn’t as bad as the princess so it isn’t always a big deal.

Can I Take Photos With Gaston?

Yes, you can take Photos with Gaston.

In fact, Gaston loves to be photographed. Taking your own photos by phone is a great opportunity, but to remember this special treat forever you need to immortalize the meeting. Professional photographers are ready to take your photo with Gaston, set before a carefully constructed backdrop to get the most out of the experience. You can see the results straight away online or by downloading an app to your phone. What’s more, you can purchase a downloadable digital copy which means you can print off as many copies of this special photo as you like, to keep forever or to give to friends and family.

Disney’s offers the PhotoPass service at a range of different locations throughout the parks. You could have a professionally taken photo of your whole family in front of memorable landmarks like Cinderella’s castle. In addition, you can access all the wild photos of your group hurtling along on Disney’s fun rides like Splash Mountain or the Seven Dwarves’ Mine. With Memory Maker, you can view these pictures at your leisure and choose which ones you want to keep.

Another lovely option available on Memory Maker is the chance to make Magic Shot photos, where elements of Disney are superimposed on top of your original photograph to make it look like you are holding a fairy in your hand or have songbirds singing around your head. Your photograph with Gaston could include hearts around the two of you as he gazes warmly into your eyes.

There is also the Disney Photo Studio where you can have your photo taken against a virtual backdrop. You could look as though you are flying with Peter Pan, dancing with Mickey Mouse, or floating with Dumbo.

Gaston’s Tavern is a great place to enjoy a snack as well as meet the masculine man mountain. It is open all day from 8.30am to 9.00pm and some of the dishes are named after characters from Beauty and the Beast. The tavern doesn’t sell full meals but mostly snacks although the portions are generous. They include healthy foods that Gaston would love including a fruit and cheese platter or ham and Swiss cheese sandwich. Prices for sandwich meals are around $10.

LeFou’s Brew is a non-alcoholic drink that looks like beer with its amber color and frothy head. Don’t worry, though, as the liquid is only apple juice and the froth is a foam made from mango fruit. You also have the chance to purchase LeFou’s brew in a signature stein that can be kept forever, with a picture of Gaston and his bulging biceps on the front. Sweet snacks include cinnamon rolls, croissants, and apple slices with caramel sauce.

The setting is as realistic as a film-set and designed to help you feel like you have become one of the townsfolk from Beauty and the Beast. The tavern looks exactly how it appears in the film when Gaston complains to LeFou about Belle’s rejection of him. Even the animated fireplace and Gaston’s massive chair look realistic.

Gaston is one to remember, but there are lots of other characters waiting to meet you at Disney World to ensure every member of the family has the chance to interact with their heroes.