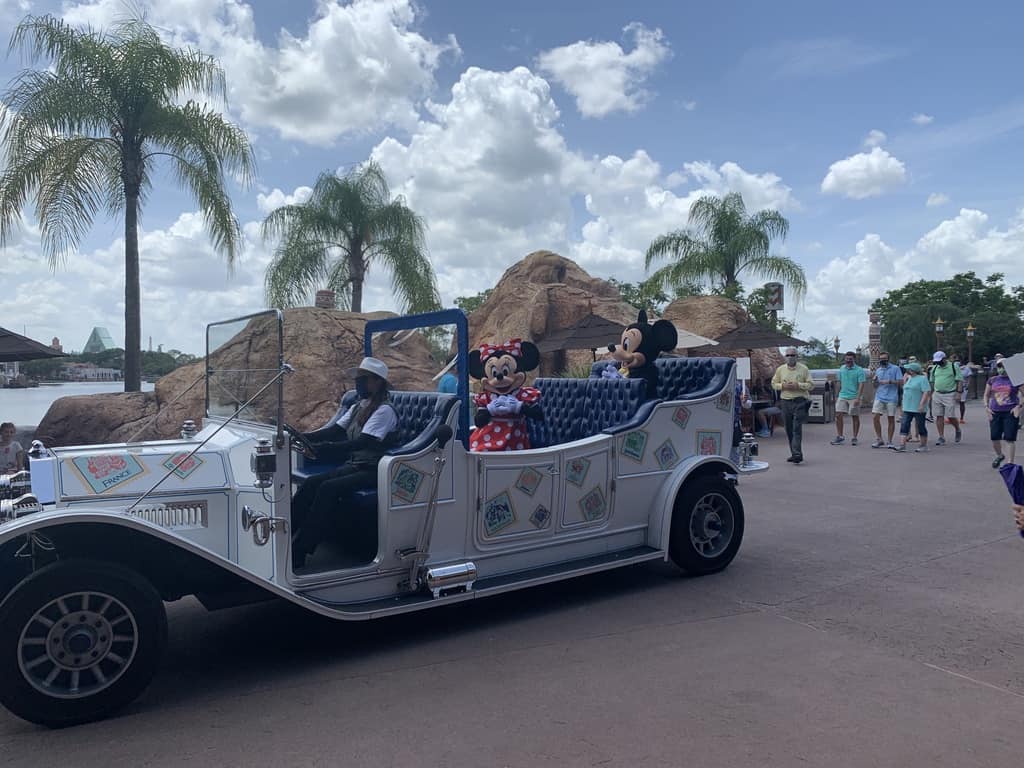 If you are visiting Florida from out-of-state or overseas, you might be wondering how far is Disney World from Miami. Like many people, you probably want to see and do more in Florida than just Walt Disney World. The Sunshine State has so much to offer to vacationers, and it makes sense to go beyond Disney World to explore Miami and beyond.

So, just how far is Disney World from Miami? The distance from Miami to Walt Disney World in Orlando is 230 miles. It is a 3-hour 20-minute drive, give or take, depending on traffic.

Keep reading to learn more about going from Miami to Disney World or the other way around. Read more about the best route and travel time. Also, find out how you can make the trip between the two points if you don’t have your own car.

How Far Is Disney World From Miami By Road?

Now, if you are arriving in Miami and have a rental car, it can be very tempting to make a quick trip to Orlando to enjoy one or more of the Disney theme parks.

But how far is Disney World from Miami?

As mentioned above, the distance between Miami and WDW is approximately 230 miles. It is usually a 3 hour 20 minute drive via I-95 North and the Florida Turnpike. This is the fastest route.

If you take the Florida Turnpike and FL-60 West, the drive will be approximately 243 miles and the trip will take you about 4 hours.

In my opinion, the Florida Turnpike is the best way down there. However, this route does have tolls (it goes cashless but that is only after a certain point south of Miami).

If you want to avoid tolls, switch to the I-95 at Ft. Pierce. The two roads run more or less parallel from there and I-95 does not have tolls.

How Far Is Disney World From Miami By Bus?

Greyhound USA operates a bus service from Miami to Kissimmee twice a day. You can board at Miami International Airport and get off at Orlando Bus Station at your destination.

The average travel time from Miami to Orlando by Greyhound is 6 hours 30 minutes. You may need to transfer one or more times during your trip.

The cost of the ticket is $33 one way per person on average. Flexible tickets can cost $50 and above.

There are also private companies that do scheduled bus trips from Miami to Disney World and back.

These are designed in a tourist format, which means they run on schedules for groups and there is a guide. This can certainly make things easier if you don’t want to bother with the hassles of driving and parking.

The price of your ticket includes round-trip transport in deluxe buses from Miami to your selected Disney World theme park.

Once there, all you have to do is purchase one-day admission tickets to the park of your choice and enjoy yourself till it’s time for your return shuttle. You get 5-6 hours of entertainment at the Magic Kingdom, Epcot, Disney’s Hollywood Studios, or Disney’s Animal Kingdom.

The transportation will sometimes pick you up from select Miami hotels in the morning and drop you back in the evening. Plus you get the services of a professional guide.

If you are planning on doing this, you will need to make the booking in advance though, because places on these tours are limited. Prices vary by season – expect to pay more in a peak season like July.

If Disney World is the highlight of your trip to Florida, your best option is to fly into Orlando International Airport (MCO). It’s easy to get to WDW from MCO.

If you are staying at a Disney Resort hotel, you can take advantage of Disney’s Magical Express service, a complimentary roundtrip service between MCO and your Disney Resort hotel via deluxe motorcoach. Note that this service is going to be discontinued starting January 1, 2022.

The other option is Orlando Sanford International Airport (SFB). It is 42 miles and a 45-minute drive to Walt Disney World from this airport.

Additionally, arriving at Miami International Airport (MIA) could be a good choice for two reasons:

One, if a vacation in Miami and the surrounding areas is your main objective, then it makes sense to fly into MIA.

Secondly, if you are arriving from overseas or even other states in the US, you might get better flight deals to MIA than MCO.

Is There A Train From Miami To Disney?

Yes, you can take a train from the Amtrak Station in Miami to Walt Disney World via these stations:

The trip from Miami to WDW by train will take around 7 hours 30 minutes. The round trip fare from Miami to Orlando is approximately $75.

As you can see, travel times are almost double, so if you are looking for convenience, don’t bother traveling by train.

Can You Do A Day Trip From Disney World To Miami?

Yes, you can do a day trip from Disney to Miami, although I would not recommend it.

The supposed 3-hour trip can take 4-5 hours each way or more depending on your speed and the number of rest stops you make. Assuming you do 75 mph for most of the route with one 20-minute rest stop, it will take you just over 4 hours.

That means it may well be late night by the time you get back, leaving you exhausted the next day.

While I love Miami, I personally prefer to go down to West Palm Beach and Fort Lauderdale. I find that there is more to see and do in these places.

If you do decide on a day tour of Miami, keep in mind that it is quite a big city. There are lots to see and do, more than you can squeeze into a few hours. A guided tour might help you hit the most popular places quickly.

What Is The Closest Beach To Disney World?

The closest beach to Disney World is the Cocoa Beach, which is only 70 miles from Orlando. The route is entirely on the interstate, which means it takes you only 70 minutes to get there by car.

Because what is a trip to Florida if you don’t chill on a beach for at least a few hours? But if you’re itinerary is mainly Disney, going all the way to Miami for some beach time is a bit too much.

Especially now that you know how far is Disney World from Miami.

If you want to head straight from Orlando airport (MCO) to Cocoa Beach and don’t have a car, the fastest way to get from MCO to Cocoa Beach is by shuttle or taxi. The taxi will cost you approximately $80-$95 and take around 55-70 minutes, depending on traffic.

Ready For Your Trip?

Now that you know how far is Disney World from Miami, is your itinerary ready? What other places in Florida are you planning to visit?