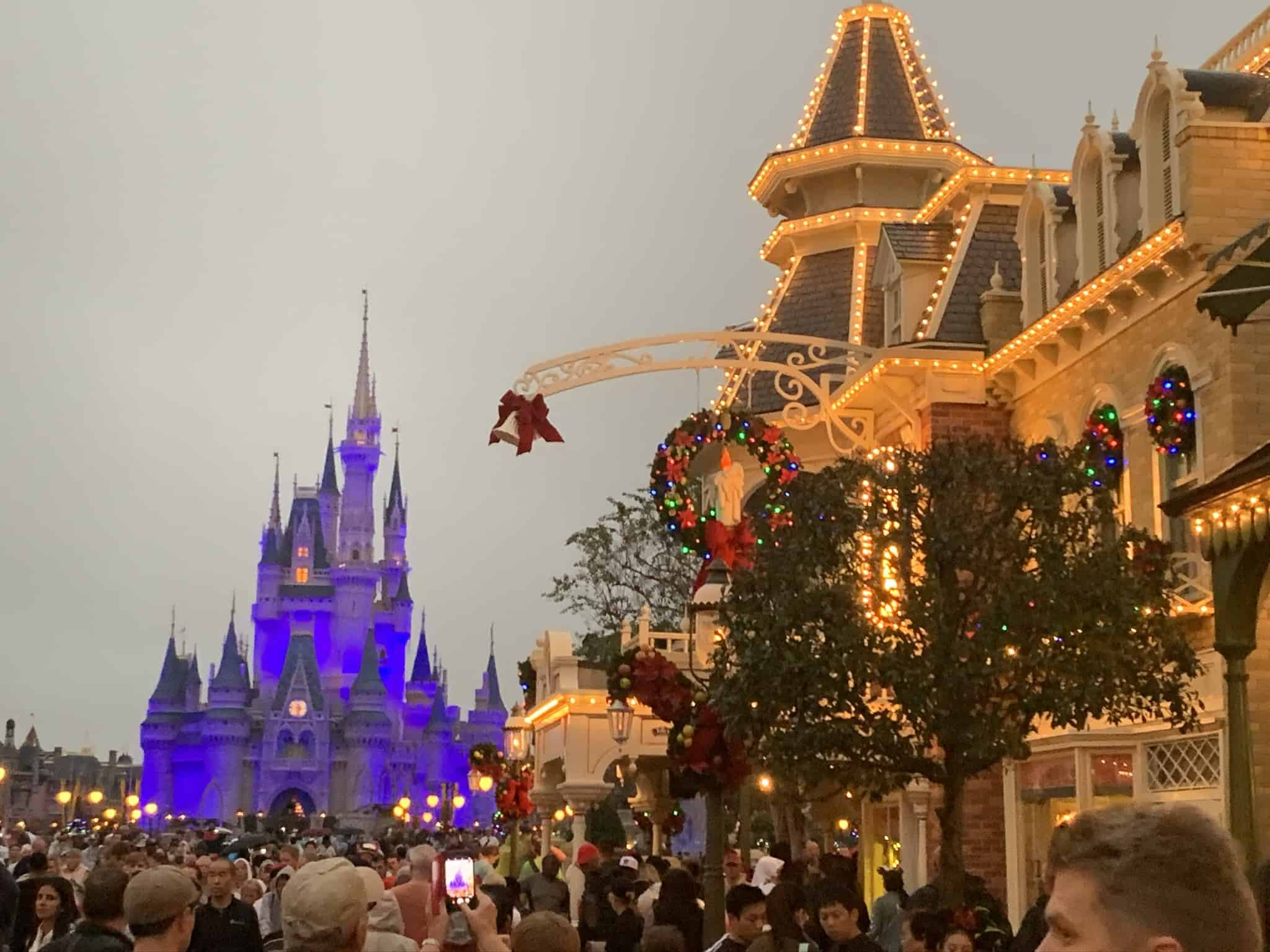 Celebrating Christmas at Disney World can add that extra sparkle and magic to the holiday season. And the Walt Disney Company does not leave any stone unturned in making it a very special place for families to spend Christmas week.

If you are planning on visiting the Walt Disney World Resort at Christmas time, keep reading. I’ve got all the information you’ll need, including park hours, what to expect, and what not to miss.

Disney Springs is also open. If you want to go to one of the two Disney water parks, please check the official website for more information (some closures continue in 2021 due to COVID-19).

Keep in mind that Christmas and New Year’s are some of the busiest days of the year at Disney World. As a result, most people steer clear of the holiday season and visit WDW in November or January to avoid the crowds.

But there are some really great events like a Christmastime parade that can make your vacation extra special.

Is It Worth Going To Disney World At Christmas Time?

The great thing about going to Disney World around Christmas is that beautiful holiday decorations are up at every theme park, the Cinderella Castle is looking its prettiest best, Space Mountain has some surprises in store, special treats are on sale, and there’s spectacular entertainment, in true Disney style.

Plus, the weather in Florida is much nicer than in the summer.

The not-so-great thing is the long lines because it does get busy during the holiday season.

But if you use the new paid Disney planning tool, Genie+ and Individual Attraction Selections, you should be able to get onto the most popular Disney World rides without waiting for hours.

In my opinion, watching a Christmas Day parade at home on TV is nice, but it cannot compare to spending Christmas Day at Walt Disney World.

A Christmas vacation in Disney World is well worth doing at least once in your lifetime.

What Time Does Disney World Open On Christmas Day?

Here are the park hours for the theme parks at Walt Disney World Resort on Christmas Day.

Which Disney Park Is Best At Christmas?

The best Disney Park at Christmas time is the Magic Kingdom, at least in my opinion.

It has the maximum number of attractions, the Cinderella Castle looks beautiful with the holiday decor, and it’s just a magical place to celebrate and have fun.

Keep in mind that the Walt Disney Company has a Park Pass system going on right now to limit capacity.

If you wait too long to make your reservations, you might find that the Magic Kingdom or another Disney theme park that you wanted to visit has already reached capacity on Christmas Day.

Mickey’s Very Merry Christmas Party is held in the Magic Kingdom theme park on some nights in November and December. It is a ticketed event, meaning you need to purchase a separate ticket (not the regular Magic Kingdom admission ticket).

The party usually lasts from 7:00 pm to midnight.

In 2021, Disney World is replacing this party with a new special event called Disney Very Merriest After Hours.

Again, this is a ticketed event where your favorite Disney characters and Santa are present to add a little extra holiday cheer to your visit. Plus, you might have to contend with shorter lines than during the daytime, which can definitely make it all more fun.

What Should You Not Miss At Disney World At Christmas?

There are lots happening at Walt Disney World in the lead-up to Christmas. Here are some of my favorites:

Are You Spending Christmas At Disney?

I hope my tips will help you make the best of your visit to Walt Disney World at Christmas time.

Have you been to Disney World or Disneyland or Universal Studios during the Christmas holiday season before? Was it busy? Did all the magic make the long lines and the trip feel worthwhile? Tell me in the comments below.