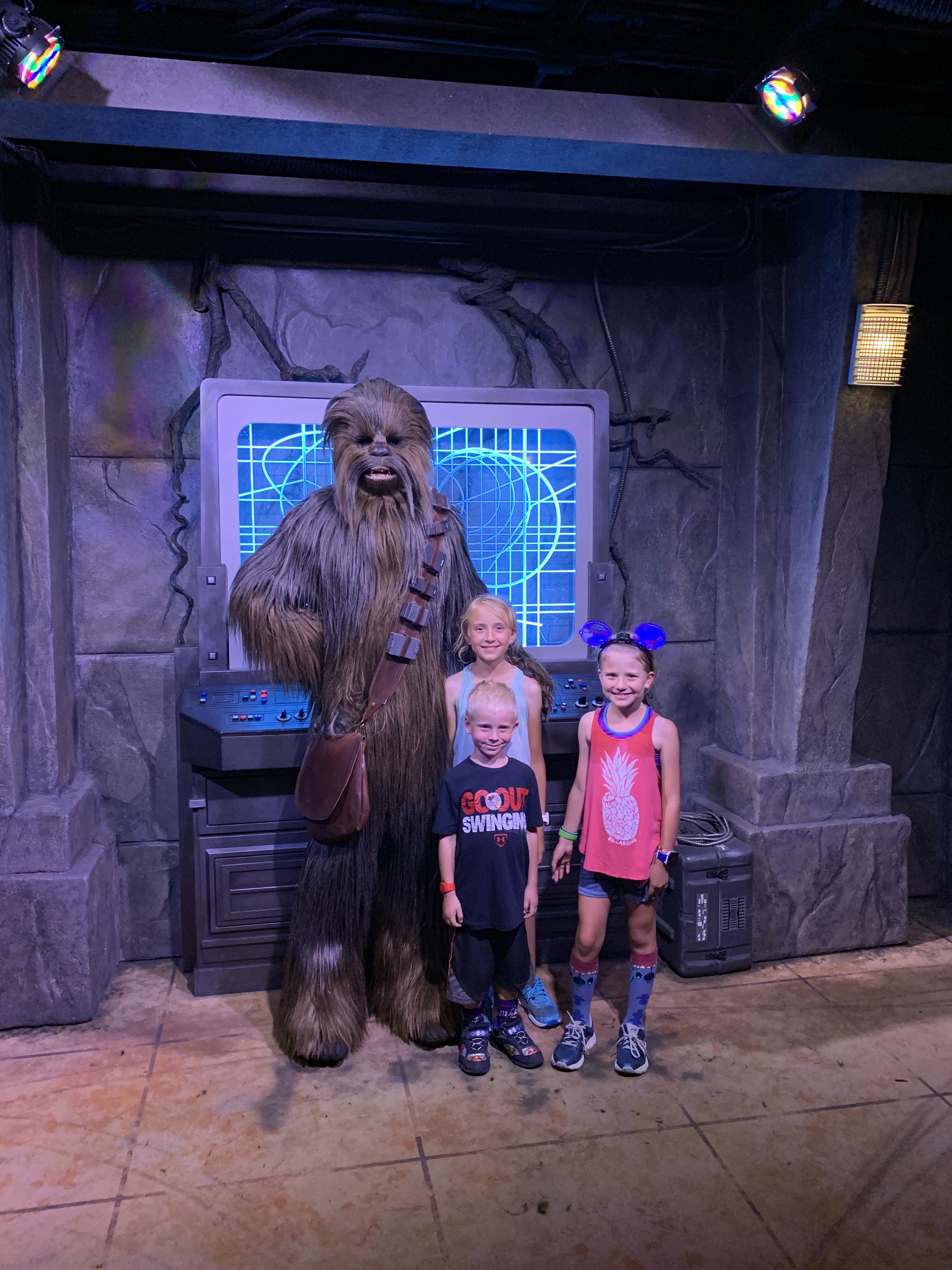 When it was announced that the Star Wars franchise officially belonged to Disney, it was only a matter of time before some of the most iconic characters made their appearances at Walt Disney World. Perhaps the most popular character, especially when it comes to photo opportunities, is Chewbacca.

Those looking to meet Chewbacca on their visit should head towards Star Wars Launch Bay, which is located in the Animation Courtyard at Disney’s Hollywood Studios. It is a meet and greet that lasts a little over 10 minutes, allowing people of any age to take pictures, get a hug and more. The wait times can vary depending on the time of day. It’s always encouraged to go during non-peak times to limit the waiting time to meet the character. Not only is Chewbacca popular, but the Star Wars section of the park has taken off in the last couple of years with new attractions.

Popular with fans young and old, Chewbacca makes for a memorable picture. Younger kids love touching his detailed fur as well and get an up-close look at one of the tallest characters at Disney.

As many people know, The Star Wars franchise is a pretty recent acquisition by Disney. For decades, fans of the franchise would not see anything related to Star Wars while visiting.

That all changed in the last few years, and Star Wars Launch Bay was the first huge attraction to capitalize on the partnership between Disney and the Star Wars franchise. It is an interactive walkthrough attraction that first opened in late 2015, and has remained very popular since. One of the major reasons why anything related to Star Wars is so popular at Disney World is that it is a franchise enjoyed by not only kids, but adults who grew up on it as well. Anyone who experienced the original Star Wars trilogy never had the chance to experience anything quite like what is found at Hollywood Studios.

All of the major characters from the Star Wars franchise are very popular throughout the day, so visitors are encouraged to plan accordingly. It is best to get there early in the day, or later on before closing. Typical hours start at 9 AM, and end at 10 PM. It tends to get the most packed in the middle of the day, or when there is inclement weather. It is an air-conditioned facility where Chewbacca and some of the other characters like Kylo Ren used to hang out and now Darth Vader can be seen, so people like to take advantage of that when available.

Where else can Chewbacca be spotted at Disney?

The only other way to see Chewbacca fairly up close and personal consistently at Disney is to wait for the daily parade at Hollywood Studios. The parade starts near the park’s entrance, and it goes through the heart of the park that makes it nearly impossible to miss. It’s not guaranteed to see Chewbacca during this time, but he usually takes part in the parade and will occasionally go into the crowd as well.

Disney seems reluctant to send Chewbacca, or any of the other major characters from Star Wars, anywhere else besides their consistent locations. It is convenient to know where to find him at all times, but it doesn’t help reduce the waiting time some might face.

What makes Chewbacca so popular for meet and greet opportunities?

There has always been something very intriguing about the fuzzy gentle giant. The Wookiee is truly larger than life, and even those were not a fan of Star Wars can identify exactly who he is. As Han Solo’s loyal friend, he plays a major part in the series.

There are occasionally kids who are a little afraid of seen Chewbacca at first in person, but Disney does a great job of portraying the character in a way that most will fall in love with him. It’s very easy to interact with Chewbacca, get pictures and have a very memorable overall experience. Disney Photopass photographers are always very eager to help out when looking for the perfect picture as well. It’s not required to use them, but for a picture that it is worth framing, they usually provide a professional service that is hard to match when compared to quick photos using a camera phone.

The final thing that really makes Chewbacca popular are the actors that portrayed him in the suit. Disney always does a great job of getting great people to play roles at the parks, but it is difficult to find someone to play Chewbacca since they need to be very physically imposing to fit into the suit properly. There was a viral video of Chewbacca interacting with a service dog, and that just illustrates a little about the people behind the costume.

Overall, people seem to have a really great time meeting Chewbacca and getting a chance to hang out with the character, as well as surrounding fans of the movie. It’s definitely a very lively atmosphere, and something everyone should try the car a little bit of time out of their day to do.

What other characters can be found near Chewbacca?

At Disney World Star Wars Launch Bay, there have been some changes in recent times as far as meet and greets are concerned. Kylo Ren used to be one of the featured characters, but he is moving to Star Wars: Galaxy Edge. Taking his place is Darth Vader, and people seem to be generally excited about this change.

Chewbacca also shares this part of Hollywood Studios with BB-8. The character isn’t quite as cuddly and lovable as Chewbacca, but it still provides a great photo opportunity for visitors.

Most people come to Star Wars Launch Bay, and Disney World Hollywood Studios for that matter, to see as many characters from the movie as possible. There might be a favorite or two, and Chewbacca usually has one of the longest lines in the park. Try to make him a top priority so that the park does not close before getting a chance.

What else is there to see that is Star Wars related near Chewbacca?

Now that a whole new land is open at Hollywood Studios, people are really flocking to the park for the first time in a while. Star Wars: Galaxy’s Edge is certainly catching a lot of people by surprise, and they love taking in everything that is offered. There are rides and attractions that are suitable for the entire family, and the entire land is designed to really put a person into the movies.

Perhaps the most notable attraction right now is Millennium Falcon: Smugglers run. It allows people to fly the millennium falcon and take part in an interactive smuggling mission. Every person has a role when flying, and directions are given by Hondo Onaka the entire time. It’s a ride that brings a lot of people over to the area, even if they are not super crazy about Star Wars in general.

Chewbacca the character might not make too many appearances outside of where he hosts his meet and greet, but that doesn’t mean that his influence is not felt throughout the entire area of the park. People can purchase all kinds of gifts and clothing with his face on it, and there are even some food-related items that are directly connected to Chewbacca. It’s definitely worth exploring and seeing everything that is available in this new part of the park.

Additional integration is planned for down the road as well. Opening in December, Star Wars: Rise of the Resistance is going to be another attraction that many people will love taking part in. There will be some long wait times in the beginning, but most people are fine with dealing with the wait in order to see something very early on in the life cycle.

Now that Star Wars: Galaxy’s Edge is officially open for business at Disney World, Hollywood Studios has dealt with some pretty heavy crowds. On the weekends and holidays in particular, there could be long wait times to see Chewbacca, ride some of the most popular rides and more. Expect crowds to be pretty heavy for the next few months, but things will start to die down and become less crowded over time.

Chewbacca might not be as featured as some would like, but there are still some amazing opportunities to meet and greet with the Star Wars character. The one good thing about Chewbacca is that he’s impossible to overlook when nearby. He truly stands out from the crowd and enhances anyone’s trip to Disney World as a memorable character.