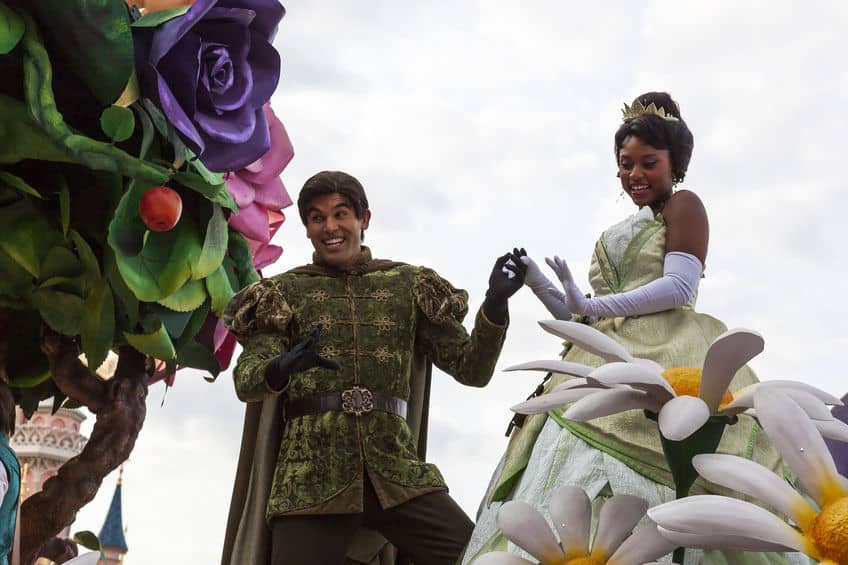 Most Disney World visitors wonder how to meet and greet Tiana Disney World. You can catch Princess Tiana at the Parade Viewing Party and Ice Cream Social right on the Riverboat Party Tiana has daily. In Frontier Land’s dock, enjoy an ice cream social with Naveen and Tiana on board the Liberty Square Riverboat where you can find the Fantasy Parade of the Festival of Disney. Naveen and Tiana join you as you start cruising around and circle Tom Sawyer Island on the Rivers of America.

Where can I meet Tiana at Disney World? There are a few different places you can see, meet and greet Princess Tiana. These places include:

Meet Princess Tiana At The Festival of Fantasy Parade

In Magic Kingdom’s Festival of Fantasy Parade, Prince Naveen and Princess Tiana appear daily at 3 pm in the Princess Garden float. On Main Street, USA, seven unique floats march down to Disney soundtracks from favorite films. The parade has a theme song and voice custom made for every float. On the Princess Garden, Disney royalty is celebrated. Belle, Tiana and Cinderella, and all their princes ride with woodland creatures in a topiary garden with birds. Princess Tiana in her most beautiful dress waves to the crowds. No matter how many times you have been to Disney World, you can be sure to catch a glimpse of Princess Tiana as long as you are in the park before 3 pm in the afternoon. Find a great spot to access the best view and don’t forget to take tons of great, memorable photos as all your favorite princesses including Princess Tiana wave at the crowd!

In front of Cinderella Castle, if you’ve never seen the Royal Friendship Faire of Mickey, you need to put it on your Princess Tiana bucket list for sure! Princess Tiana performs nay times each day as Minnie and Mickey along with all their friends begin to host parties for all their friends far and near. The crew of Princess Tiana sings silly songs and dances around. Check out part showtimes at the time-table guide.j On the Castle Forecourt Stage, The Royal Friendship Faire of Mickey is a great show occurring many times each day. This newest show has a Tiana showcase in one of its sections. It also features the other characters of The Princess and the Frog including Louis and Naveen along with Princess Tiana.

Meet Princess Tiana At The Royal Friendship Faire of Mickey

On the Castle Forecourt Stage, The Royal Friendship Faire of Mickey is a great show occurring many times each day. This newest show has a Tiana showcase in one of its sections. It also features the other characters of The Princess and the Frog including Louis and Naveen along with Princess Tiana. You are cordially invited every time you come visit Mickey’s Royal Friendship Faire. This affair to remember features Rapunzel, Flynn from Tangled and The Princess and the Frog characters including Tiana. In this show, Mickey even recruits Elsa, Anna, and Olaf to join the josh! Watch both contemporary and classic characters by Disney in this musical and magical extravaganza featuring live, dazzling and dancing effects and music from all your favorite movies.

In the Magic Kingdom’s Liberty Square Bridge, meet Naveen and Tiana at The Princess and the Frog’s character meet and greet. Intermittently through the day, Princess Tiana makes an appearance. All you need to do is to pick up the Magic Kingdom Times Guide near the maps of the park at the park’s front area for Princess Tiana’s exact times in the course of her visit.

Princess Tiana frequently appears at The Magic Kingdom park opening’s the Magic Kingdom Welcome Show. Arrive about twenty minutes before the park opens to see Princess Tiana in this awesome show. At the welcome show, Tiana introduces the Dreams show. Various characters from Disney long and reveal their deepest dreams. Remy wishes for his career as a Paris cook. Ariel wants to be part of our world and Rapunzel longs to be free from her tower. Songs include Out There, Part of Your World and Down in New Orleans.

What Other Attractions Will Princess Tiana Disney World Fans Like?

Fans of Princess Tiana and The Princess In The Frog will love the other themed attractions that are based on the film. Set in New Orleans, The Princess and the Frog fans might like staying at the Disney Port Orleans French Quarter Resort or the Port Orleans Riverside Resort of Disney. There is a Louisiana and New Orleans theme at the Disney World moderate resorts. There are sculptures of band alligators at Dixie land and a food theme of Mardi Gras selling beignets, perhaps the man-catching kind that Carlotta wanted Tiana to create for their ball. Those in the know that it is the Garden District of New Orleans in which Disney had taken its Port Orleans Riverside Resorts.

What Princess Tiana Merchandise Is Available For Fans?

There was a lot of merchandise available before and after the release of the film The Princess and the Frog. There was a lot of positive feedback even before the movie came out. Before Halloween of 2009, Princess Tiana’s gown was sold out. There were hair care products with Princess Tiana Disney World themes which sold out seven hours after it was available online. Merchandise from the movie included a wedding gown costume and even a cookbook for kids. Before the Disney on Ice show Let’s Celebrate, Princess Tiana was featured.

Are There Other Shows That Feature Princess Tiana?

Yes. At Walt Disney World Resort’s Tiana’s Showboat, a live parade and show featuring Princess Tiana were available in 2009. The cast of this show included Doctor Facilier, Louis the alligator, Prince Naveen, and Princess Tiana Disney World. Songs from the movie after a short story was presented. Every one of the actors sang a song while the rendition of Walt Disney World did some lip-syncing. In the Disneyland version, the New Orleans Square actors boarded the park steamboat and paraded to the Rivers of America, to the delight of the crowd. This show ran for about a year and was replaced by the Mardi Gras Celebration along with five of the Mardi Gras dancer’s original presentation. the movie songs were performed by the Jambalaya Jazz Band.