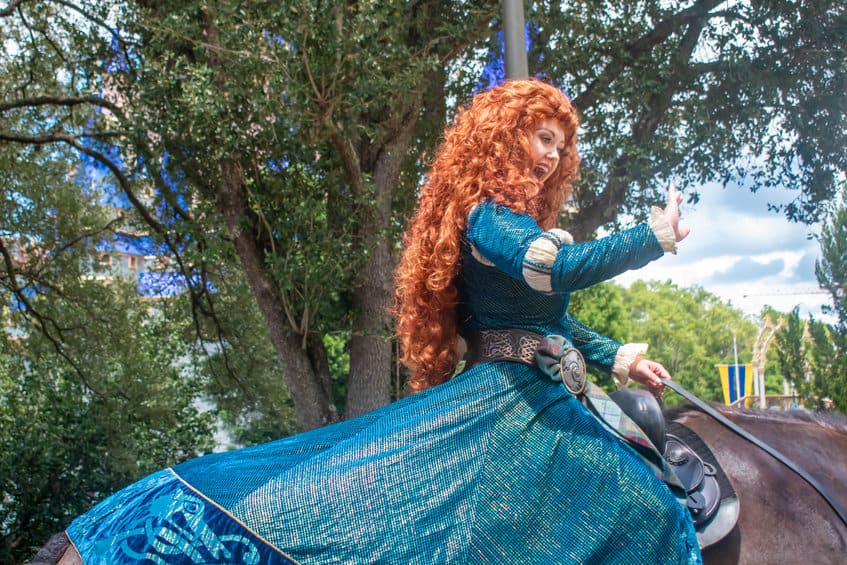 Have you ever wondered, “Where can I meet Merida at Disney World?” You are not alone. Particularly, if you are a big Disney fan, or know someone who is. In fact, you may have set your heart on enjoying everything related to princesses. You are not alone! If your favorite princess happens to be feisty, you will want to know exactly where to find Princess Merida in Disney World. Fear not, as there are specific locations you can find Merida and meet and greet her as you take photo after photo with your favorite Brave Disney character. At Disney World, it is not very hard to find Princess Merida and all things Brave-related, as long as you know exactly where to look! You will be able find Merida at the Festival of Fantasy Parade of Magic Kingdom, at Fantasyland’s Fairytale Garden and at It’s A Small World in Disneyland. Download the Disney App and get the exact schedule Merida Disney World makes an appearance.

Merida Disney World Is From Brave

Princess Merida of DunBrock is the protagonist in the Brave film by Disney’s Pixar. Merida was added to the line up of Disney Princesses as the eleventh princes and the first character of Pixar to receive this honor in 2013. Also, Merida is the main character of the games Temple Run: Brave as well as the game Brave. Also, Merida is a character you can play in the series Disney Infinity. This first appeared in Disney Infinity2.0

Merida Disney World has blue eyes, a slender body, red, curly, wild and long hair and pale skin. Her primary outfit is a traditional gown which is dark teal, Her all-cotton gown has stylized slits for moving as she does archery. She is dressed in a turquoise Medieval-style gown with gold trim, long arms, bold beads and has a white wimple holding her hair. She wears a gold buckle and a black/navy cape. On her back, a bow is slung. She has arrows over her shoulder in a brown leather quiver around her waist. Merida is also seen wearing a gown that is dark blue with patterns which are light green. When you meet and greet Merida, she will most likely be seen in her traditional dark teal gown.

Merida is the daughter of Queen Elinor and King Fergus who were the rulers of their Scotland kingdom. The Queen was expecting Merida to find a husband since this was the traditional thing to do. She wanted her daughter to become a proper lady of royal blood. However, Merida insists that she be the one to take charge of her life. Her archery skills were nearly perfect and in fact, she was one of the kingdom’s best in archery. She was also skilled in sword-fighting spears and racing across the country on her shire horse, Angus. Despite her forceful, outgoing personality, Merida has a soft heart particularly when it comes to her triplet siblings Harmis, Hubert and Harris. She was not spoiled but was pampered. She loved her parents even if she did not agree with everything they said.

Princess Merida fans all know that at one time, Dingwall, Macintosh, MacGuffin and The Kingdom of DunBrock were in war constantly. When invaders from the north and Roman soldiers made threats to DunBrock from the ocean, under the sword of Fergus, the four clans joined together to defend their war. The group was able to protect their land from getting invaded, thus forming the DunBroch Kindom. Lords of the clan of Dingwall, MacGuffin and Macintosh because of the kingdom’s feudal lordship. Elinor was crowned as their queen and Fergus was their king.

Once Upon A Time

Merida was once a recurring character in the fifth season of the series Once Upon A Time. The character of Merida was played by Amy Manson, an actress from Scotland. Merida rescues her triplet siblings in the sixty episodes called The Bear And The Bow. Belle helps her in this episode. Three episodes later, in the 9th episode, it is revealed that Mulan has tutored Merida in fine combat points. Later, Merida, Ruby and Mulan team up against Zelena, the Wicked Witch of the West and King Arthur on the even of her Dunbroch Queen coronation. The reason she was going to get a coronation was that a few years earlier Arthur kills Fergus.

Merida makes her way down Main Street USA during Magic Kingdom’s Festival of Fantasy Parade. Find the biggest bagpipe you know in the parade. Merida’s float travels down the parade route and rides on an enormous bagpipe along with Scotland dancers. This is one event you will want to blog about. This parade happens daily at either two or three in the afternoon. For the exact time, download the app called My Disney Experience. It tells you the exact time you will be able to see Princess Merida during your visit.

Merida will share story after story including how she loves archery and all the adventures she has been through. You can hear all about it during the character meet. This super fun event will have available times in the app called My Disney Experience. You can’t get a Fast Pass for meeting Merida but it is definitely worth the meet!

You will also find Merida meeting and greeting fans and princess-lovers at the It’s a Small World attraction near the parade terminus gate. She is usually incomplete costume including her dark teal gown and waving her hand.

You will find Merida making a few appearances at Hong Kong Disneyland when it celebrates anniversaries since she is part of the roster of princesses. Fans adore her archery skills and if you are ever in the area, don’t forget to come to shake her hand.

You will also find Merida in Epcot’s World Showcase and you will be able to spot her easily with those huge dark red curls cascading down her front and back.

Did Merida Ever Have To Be Rescued By A Prince Like All The Other Princesses?

No, Merida is called the “headstrong heroine” and is the first princess that did not need to be rescued by a male love interest. Disney has been praised time and time again to have made this modern, feisty girl, even if the setting is in the ancient world. Unlike all the other princesses, Merida does not need someone to rescue her. She is a Scottish, spunky princess with red, wild hair. She was created to attract fans of The Hunger Games and Twilight movies. It has been noted by critics that her hair seems to be a symbol of her independent, wild spirit. She is a great role model who exemplifies women’s strength because she is independent and brave. She is not the typical princess o Disney or a damsel in distress that many children’s films portray.

Where Can You Get A Merida Costume?

Merida is a popular character and you can get a Merida costume at any Disney store. The bright red hair, the dark teal dress and the archery set are easily recognizable and you can find the costume size you need. Merida costumes are a great alternative to the usual princess costumes that everyone seems to be wearing these days. Other princess costumes sometimes include Belle, Cinderella, Sleeping Beauty, Snow White and Ariel, among others. To be Merida shows you admire her spunk. Plus, the dark teal and red hair combination is a refreshing change from all the others. A Merida costume is the perfect costume to wear for celebrations such as costume parties, birthday parties with a Brave theme, book parties where they ask you to go as your favorite book character, Halloween parties, to go trick or treating or even theme parties where you need to go as a favorite party.

Was The Merida Makeover Approved?

At one point in time, Disney re-created the character of Merida to look more glamorous, with a smaller waist and larger breasts. Also, the new Merida looked older. Gone was the teenage red-headed tomboy and in her place was a somewhat sexier version. When over two hundred thousand people signed a petition in Change dot org to restore Merida to her previous, original look, Disney removed the newly made-over version of Merida. The original Merida is thought to give younger girls a stronger, better role model, something of substance, a more attainable heroine and not just a pretty face waiting around for some guy.

Who Are The Other Princesses You Can Meet And Greet?

Aside from Merida, you can meet and greet other Disney princesses in various venues of Disney Park. Included in the list of princesses are Rapunzel, Tiana, Snow White, Pocahontas, Mulan, Jasmine, Cinderella, Belle, Aurora and Ariel. If you are a fan of all the princesses, you can try and meet as many of them as possible. Most of them love to have their picture taken with you. Others even shake your hand and begin conversations with you. Take as many photos as you possibly can to remember all your princess meet and greets forever.