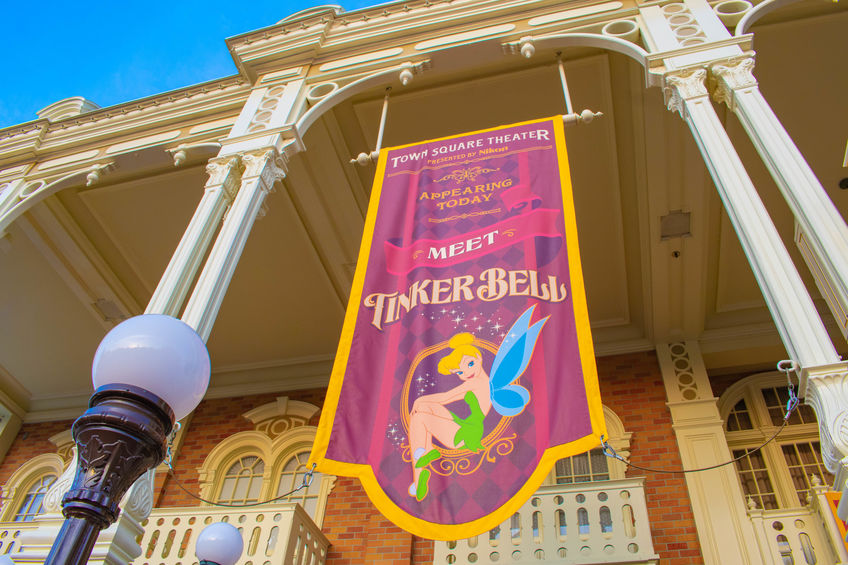 Peter Pan’s companion is one of the most beautiful and helpful sidekicks in the Disneyverse. She can do magic and go basically anywhere unnoticed for those who don’t know the difference between pixie dust and firefly’s lightning. That’s why many people always wonder, “where can I meet Tinkerbell?”

Tinker Bell is meeting and greeting people every day at the Town Square Theater in the Magic Kingdom Park’s Main Street USA from 8 AM to 5:30 AM but her Extra Magic Hour goes from 8 AM to 5:30 PM. As Tinkerbell is very popular, try to be as early as possible to prevent missing out other attractions.

Tinkerbell’s meet-and-greet attraction is an incredible experience that features her character and some interactive actions that make it a little more engaging than some of the other princesses.

The Experience of Meeting Tinkerbell at Disney World – SPOILER ALERT!

Spoiler Alert! Here you’ll learn a little bit about Tinkerbell’s experience and it may be a little less magical in comparison to going for the unexpected. If you are going for the first time, you should probably head right to the line or exchange your FastPass+ if you consider it is worth it.

Now, getting there is simple. Looking at Cinderella’s Castle, you have to take the path at your right. From there, you’ll see the Magician Mickey sign and another one for Tinkerbell. When you enter the theater, you will find the line to meet her. Careful, if you take the left side, you’ll go to Pixie Hollow instead.

In the beginning, you’ll have to wait until a cast member drops a rope for you. When this happens, you will see a magical garden with a special grass that sparkles. At this point, it is building some excitement.

Then, you will find a cast member who will wait until every guest enters. Once you are all there, he will ask you to fly, stating the famous quote “now, all we need is a little faith, trust and…” You will all respond “Pixie Dust!” and the walls will start glowing and you will have a sensation of “shrinking” to the fairy size. After that, all that’s left is going through a door to meet Tinkerbell.

Tinkerbell is incredibly playful and she has a lot of objects just lying around her room. When you meet her, you can ask her to play with you -she’s incredible at Tug of War. You can also ask her for pictures and autographs. She takes a considerable amount of time with each one of the guests, which is probably why there’s always a line outside. However, this makes it a great experience.

Parents are always advised not to promise their children they are meeting Tinkerbell (unless you plan to use a FastPass+ on her), but rather seeing her. That way, you won’t have to get stuck in line for hours and, if you didn’t have enough time or the line is just way too long, there are also a couple of other places where you can easily see her.

Other Places Where You Can See Tinkerbell

You can see Tinkerbell at Peter Pan’s Flight. Obviously, you won’t have time to stop say hi but at least you’ll get to see her multiple times throughout the suspended dark ride. The idea of this attraction is helping you fly the same way Peter Pan does and he can’t do all those impressive things without his pixie best friend.

This ride is so amazing that it has been one of the few remaining from Disneyland’s opening day in 1955. Certainly, they have modernized the system several times so there’s nothing to fear. Besides, it has so much magic that the big mouse exported it to Paris, Shanghai, and Tokyo as well.

Keep in mind that this ride is quite popular. If you go in a very demanding day of summer, for example, you may need to use a FastPass+ to avoid doing the line. Otherwise, you should go as soon as the park opens its gates.

Mickey’s Philharmagic at the Magic Kingdom

This crossover attraction features Tinker Bell flying across the screen. You’ll see her if you pay enough attention after Lion King’s Simba comes out. It may not be the same as meeting Tinkerbell, but you can at least repay the promise of seeing her.

The 12-minute 4D film is located a few steps away from the previous attraction at the Magic Kingdom, but you can also find it in Tokyo, right where the Mickey Mouse Revue was screened; in Hong Kong’s Fantasyland, right next to the Royal Banquet Hall; in Paris, at the famous Discoveryland Theatre; and in California’s Hollywood Land, at the Sunset Showcase Theater.

Festival of Fantasy Parade at the Magic Kingdom

Another attraction where you can easily see Tinkerbell is at Disney Festival of Fantasy Parade, sitting right on the back of Peter Pan’s float. This is a (not-so-) small tribute to the tales that Fantasyland features. During the event, you’ll listen to incredible music and you’ll get to see different characters dancing and greeting people. In fewer words, it’s like Disney became alive.

The 12-minute ceremony is celebrated almost every day at 2:00 PM, but there are certain days -like Christmas and other holidays- where it is offered at noon. So, always check the Time Guide to know the route and timing of this incredible parade.

The Main Street Electrical Parade at the Magic Kingdom

Tinker Bell has had a main role in this incredible event since 2017. Her float lights up most of the Magic Kingdom’s evenings, but there are some days of the month the parade doesn’t take place. So, take a look at Disney’s Time Guide to check if it will be available any of the days of your visit.

Even though this parade has performed in other Disney parks like Tokyo, Paris, and California, the only one remaining is the Tokyo Disneyland Electrical Parade: DreamLights. However, Tinkerbell has no leading role in this performance.

Happily Ever After Fireworks -former Wishes- at the Magic Kingdom

You can also see Tinkerbell flying from Cinderella’s Castle toward the restaurant The Plaza when the former Wishes Fireworks is just beginning. However, take into account that there are some cases in which this doesn’t happen due to security and weather factors.

Some of the best places where you can see her flying are somewhere around the rose gardens near The Plaza or the Tomorrowland Bridge. In the first one, she will look amazing flying right over your head -but you will probably have a hard time checking on Main Street Electrical Parade on the same evening because it is a little far from the route, though- and the second one will be an incredible spot to watch from a third-person perspective.

This is a great performance and one of Disney’s most representative shows. There are 18 minutes of incredible fireworks and Tinkerbell flies leaving pixie dust at her back right before it all starts or at the end of the presentation.

Another incredible show where you can see Tinkerbell is on the Golden Dreams Finale’s American Adventure show when it is screened at the America Pavilion. Pay attention to the finale song because you will probably see her right next to Walt Disney.

Even though this show intends to show the greatness of America and it features incredible historical figures like Mark Twain and Benjamin Franklin, the production that features 35 audio-animatronic figures and images in a 72-feet screen is updated to show more recent events every time.

In that sense, it shows important personalities like Thomas Jefferson, Teddy Roosevelt, Frederick Douglass and more. When it gets to “recent” years there is a cameo of Walt Disney and one of his most important animated characters: Tinkerbell.

Although it is very seasonal -only in the Spring-, every year Epcot presents its annual garden and flower festival. It features a wide range of sculptures shaped like some of the most incredible Disney characters and, even though it is not always certain if you will see Tinkerbell’s sculpture, the last couple of years, it has included fairy topiaries in the temporary butterfly pavilion.

Although it is literally impossible to find Tinkerbell at Disney’s Animal Kingdom Park, you may find her in the marble floor of the elevator’s floor design of the Disney’s Grand Floridian Resort, along with Wendy and Peter Pan.

You can also find her sprinkling her dust in the attraction “Walt Disney One Man’s Dream.” The inspirational movie features how Walt Disney created the famous studio and his theme parks with his own words.

You can also find her at the ceiling of Once Upon a Toy Store, at the side of the characters in Flight Balloon, in the TrenD boutique painted on the wall, and also in some of the Disney Springs’ shops.