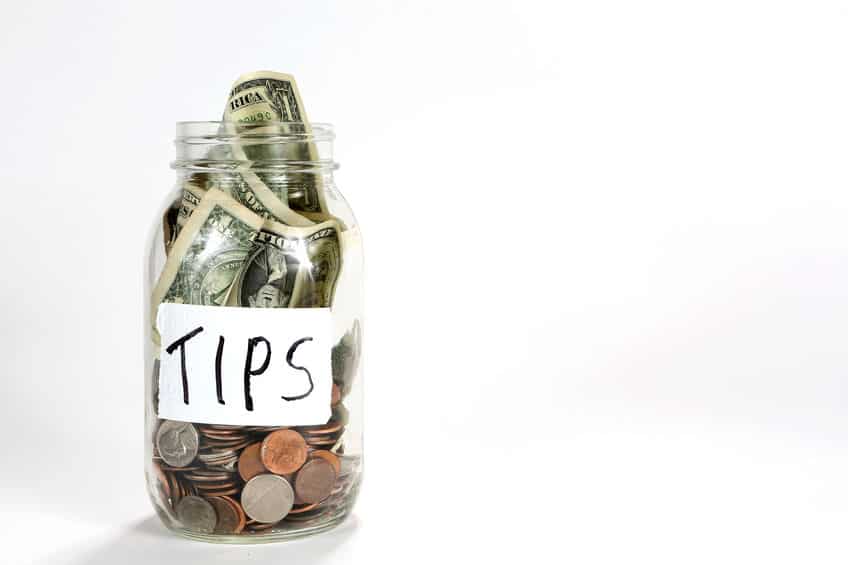 Gratuities are a given when you vacation in the United States. Americans understand this but international visitors are sometimes annoyed by it. One destination in the US where tipping can be a little different is Walt Disney World. Even Americans are confused about what to do here. There are some situations where you leave a tip and some where you do not. If you’ve been wondering – Do you tip at Disney World? – we’ve got all the answers for you.

We’re going to dig deep into tipping at Disney World. Keep reading to find out who to tip and how much. Get answers to questions like – Do you tip at Disney buffets? Do table service restaurants at Disney World include gratuities? Do monorail drivers need to be tipped? And more.

You should tip luggage handlers at Disney World just like you would at other places in the US. This includes at the airport, on Disney transportation from the airport to your hotel, at your hotel, and anywhere throughout your trip when someone carries your bags for you. The porter who assists you with transferring your bags from the baggage carousel to ground transportation, the luggage handler who takes your bags from the taxi to the hotel lobby, and the hotel bellman who brings your luggage to your room should all receive tips.

How much to tip luggage handlers at Disney World? The rule of thumb is $2-$3 per bag in cash, more if the bag is heavier than average. Many people believe $5 should be the minimum tip, so you can consider paying $5 for 1-2 average-sized bags. Of course, if you’re on a tight budget and want to save some cash, you can move your bags yourself. It’s not difficult if you’re traveling light and have roller luggage. However, it may not be an option for people with limited mobility, small children, or a lot of luggage.

Tipping for Transportation at Disney World

If you’re using Disney transportation, you may or may not need to tip depending on what it is. Magical Express drivers accept tips and may even have a small container for tips at the front of the bus. If you just hopped on and off, then don’t feel obligated to leave a tip. However, if the driver helped in loading and unloading luggage, then the $2-$3 per bag rule is a good one to follow. If you signed up for a direct transfer of your bags from the airport to your Disney hotel, you won’t see the person who handled your luggage, so there’s no tipping in this case.

When you use Disney transportation on the property, such as boats, monorail, or bus transfers, the drivers do not expect tips. You will likely not have luggage with you anyway when you’re going from your Disney hotel to the parks or from park to park.

For other forms of transportation on your Disney vacation, tip like you usually would. This includes a 15% tip for limo or town car drivers, taxi drivers, and ride-sharing drivers like Lyft and Uber. If the driver has done something above and beyond for you, like make an extra stop, assist with car seats, or load a large amount of luggage, tip more.

One Disney transportation that’s a gray area when it comes to tipping is the Minnie Vans. It is a ride-sharing service that is staffed by cast members, and in general, tipping is not necessary. You can always offer a tip if a cast member offered excellent service, but they may not accept.

If you’re staying at a deluxe Disney Resort, they probably offer valet parking. If you utilize this service, you should tip the valet every time they park or retrieve your car. $2-$5 is the average rate.

The rule of thumb is that Mousekeeping gets $1 per day per person in your party, so if you’re a family of 4, this means leaving $4 per day. It’s a good idea to tip every day instead of once at the end of your trip. While it may seem like an inconvenience, remember, the same person may not clean your room every day. Leave the tip in an envelope that says “Housekeeping” with a small thank you note so they know the money is for them. If you’re a super messy family, be sure to leave a little extra.

At table service restaurants, the norm is to tip 18%-20% of your bill, more if you received exceptional service. Some international guests do roll their eyes at this, but this is pretty much the standard in metro cities in the US now. If you are a party of six or more (babies are counted), then an 18% gratuity will be added to your bill at a Disney table service restaurant. Also, gratuities are included at pre-paid dining events like character meals.

As far as tipping at Disney buffets, the servers here should be tipped just like the table service restaurants. Again, if you are a party of six or more, an 18% gratuity will be added to your bill – be sure to check so you don’t double tip.

If you are dining with Disney Dining Plan credits, gratuity is not included with your meals. You should tip your server as you would at a table service restaurant – cash, cards, and Disney gift cards are all good but cash is best. Your bill will show how much you would have paid if you’d paid cash, so calculate the tip accordingly.

If your order in-room dining at your Disney hotel, a delivery charge and an 18% service charge will be added to your bill. If your server is extra nice, you can tip them $3-$5.

The one place where you don’t need to tip when you’re dining in Disney World is the quick service or counter service restaurants.

Tipping at Other Places in Disney World

Do I tip a cast member?

In general, there’s a no-tips rule for cast members in Disney World. It is unlikely a cast member will accept a tip if offered one. Many guests like to bring small treats from their hometown and hand them out. A great way to say thank you for exceptional service from a cast member is to fill out a guest comments card mentioning the cast member’s name – this can help with promotions to higher-paying jobs – comment cards are available at Guest Services. You can also do this when you get home by writing to Walt Disney World Guest Communications. Also, be sure to tag your social media posts with #CastCompliment and @WDWToday.

Do I tip for childcare?

The usual rules apply. The average gratuity for a sitter is $10 to $20.

Do I tip service providers at recreation facilities?

The norm is a 15% tip for instructors at specialty recreational facilities such as archery, tennis, parasailing, and waterski.

Do I tip for salon/spa services?

The going rate for personal grooming services at a salon or spa is 15%-20%. It’s the same at the Bibbidi Bobbidi Boutique or Pirates League.

Tipping etiquette at Walt Disney World more or less follows US norms, but some things are different. Now you know – who to tip at Disney World and how much.