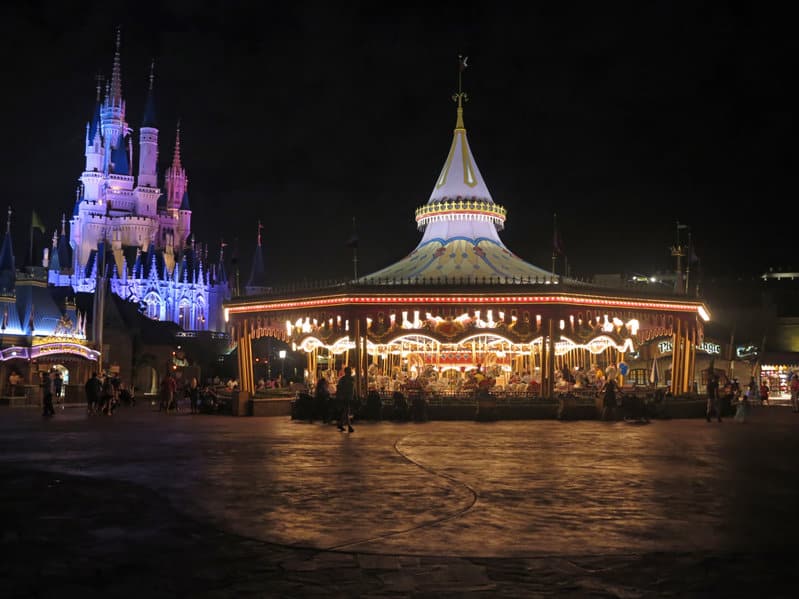 Since it opened in 1971, Walt Disney World Florida has brought joy to millions of people from around the world. With an average yearly attendance of around 40 million guests at its four theme parks, two water parks, retail complexes, and athletic complex, not to mention dozens of resort hotels, there is a lot of interesting information about this mammoth world of amusement. With Disney’s 50th anniversary soon to be celebrated in 2021, we’re bringing you some lesser-known Disney fun facts, starting with – What’s the oldest Disney World ride?

The Prince Charming Regal Carrousel premiered at Walt Disney World when the turnstiles opened in 1971 for the very first time. It’s the oldest ride at Disney World, but did you know the carrousel is actually older than Disney World itself?

Continue reading to learn some more interesting and impressive facts about some of the oldest Disney World attractions. Knowing the history behind some of the rides will make them all the more magical on your next visit.

The Prince Charming Regal Carrousel located in Fantasyland at the Magic Kingdom Park is the oldest Disney World ride. It is a slow, spinning, merry-go-round ride that’s open to guests of any height and all ages. Particularly popular with the toddler brigade, this colorful, whimsical attraction is an absolute delight. Guests climb aboard one of the 90 ornately carved wooden horses or the spacious chariot at this classic attraction that was inspired by Disney’s Cinderella.

But the Prince Charming Regal Carrousel is older than Disney World itself. In fact, it’s more than one hundred years old having been built in 1917. Isn’t it impressive that machinery built more than century ago is still going strong?

Disney acquired the carrousel from the Belle Isle Park in Detroit, Michigan. The ride premiered when Disney World opened its doors in 1971, making it the most authentic treasure on Disney property in Orlando.

What are some of the other oldest rides at Disney World?

Walt Disney was a noted train enthusiast, and his love of trains was bound to find a place in his parks. The Santa Fe and Disneyland Railroad has been a favorite since 1955 in Disneyland California. In Florida, the Magic Kingdom Railroad celebrates classic Americana, providing a picturesque photo-op near the entrance of the park. The clanging of the engines, the chug of the wheels, and the call of the train whistle are reminiscent of a bygone era of steam engines. Guests climb aboard one of four meticulously restored vintage train cars built between 1916 and 1928 and embark on a relaxing 1.5-mile, 20-minute trip encircling the Magic Kingdom Park. Pure nostalgia! You can take a round trip or disembark at the Frontierland or Fantasyland stations.

Located in Liberty Square at Magic Kingdom Park in Disney World, the Haunted Mansion has been giving guests a scary good time since the summer of 1969. Although the Haunted Mansion in Disneyland California is older, the Florida version is bigger (and some say, scarier). This popular dark ride continues to delight guests with eerie ghouls, spooky surprises, creepy haunts, and chilling graveyard scenes, but is ultimately only mildly frightening, because it’s Disney after all and the ghosts are friendly.

Admit it, you can’t stop yourself from singing along to the timeless classic or get it out of your head for a few days after going on this beloved ride. It’s A Small World is one of the oldest attractions at Disney World. It was an opening day ride in 1971. But interestingly enough, it’s also an attraction that predates Disney World itself. It’s A Small World premiered at the New York World’s Fair in 1964! So, the happiest cruise in the world, located in Fantasyland at Magic Kingdom Park, has actually been delighting people for more than half a century. The 10-minute slow boat ride features hundreds of dolls from all 7 continents placed against vivid backgrounds and iconic scenes from nations around the world.

Another attraction that opened at Walt Disney World Resort in Florida in 1971 is the Tomorrowland Speedway, premiering as the Grand Prix Raceway. It was expanded in 1973, remodeled in 1994, and renamed the Tomorrowland Speedway in 2008. Inspired by the Indianapolis Motor Speedway, this 4-minute go-kart ride is a chance for kids and adults to put pedal to the metal in their own gas-powered car as they accelerate around a scenic track amidst lush foliage. Guests who are at least 54 inches tall (137 cm) can ride their own car. Guests who are at least 32 inches tall (81 cm) can drive as long as they’re accompanied by someone at least 54 inches tall.

The original Space Mountain opened in 1975 in Florida, two years before its California cousin, making it one of the oldest Disney World rides. Arguably one of the most famous roller coasters in the world, Space Mountain has guests blast off into space on a roaring rocket, streaking past flashing orbs, shooting stars, migrant meteors, and wayward comets. The futuristic soundtrack and inky blackness add to the atmosphere and get the adrenaline going along with the big drops on this most thrilling of rides.

Already an iconic ride at Disneyland in California since 1955, the Jungle Cruise had a reputation that preceded it when it opened at Disney World in 1971 as the anchor attraction in Adventureland at Magic Kingdom Park. Guests of all ages and any height can join the fun on this slow ride that charts a course on the scenic rivers of Africa, Asia, and South America. The canopied tramp steamer carries guests through treacherous waters and past lush foliage on a 10-minute journey that is quite unforgettable.

What are the oldest Disney World rides outside Magic Kingdom?

As you can see, the Magic Kingdom Park features quite prominently in the list of oldest rides at Disney World (it’s a wipeout so far!). So, here are three of the oldest Disney World rides at the other Disney theme parks.

This has been an iconic attraction since Epcot’s opening day in 1982 when the easily recognizable dome welcomed guests for the first time to embark on a journey that explores the history of human communication.

This is a dark, thrill ride with big drops that opened in 1994. Guests climb aboard a rickety hotel elevator that plumets more than 125 feet, not once but multiple times, at a speed of nearly 35 miles/hour. Terrifying!

This is the newest kid on the block on our list of oldest Disney World rides today, having opened in 1998 as an opening day attraction at Disney’s Animal Kingdom. Guests climb aboard an open safari vehicle and encounter more than 30 kinds of animals on Kilimanjaro Safaris, which is a wonderful guided tour of the African savanna. We love that the barriers have been so cleverly hidden that it all looks like one vast open area.

So, now you know some of the oldest Disney World rides. How many of them have you been on? And won’t you love to ride them again now that you know the interesting history behind them?