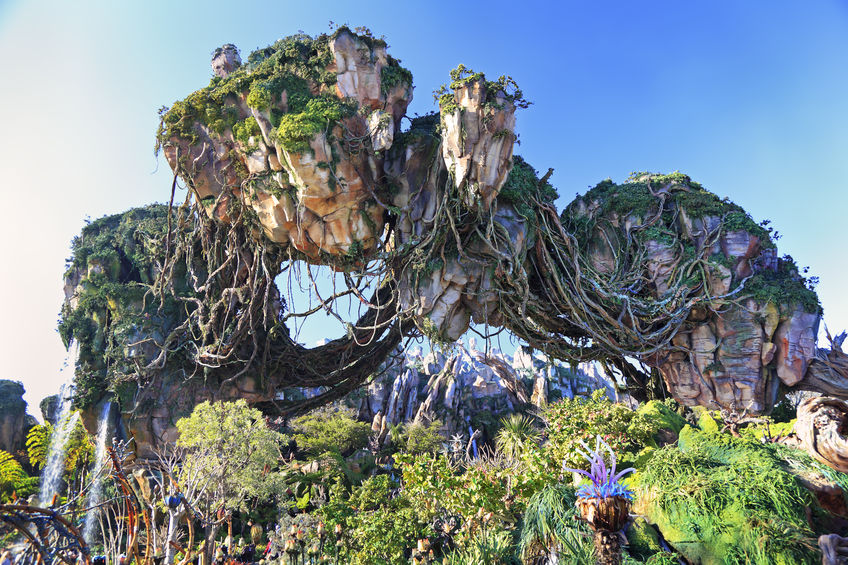 Pandora – The World of Avatar is a themed area in Walt Disney World, Orlando inspired by the James Cameron blockbuster movie Avatar. The area is designed as a fictional moon Pandora and features fantastic things like bioluminescent plants, floating mountains, and alien wildlife. Sounds amazing, right? But you are probably wondering – what park is Avatar in Disney World?

Pandora – The World of Avatar is located in Disney’s Animal Kingdom theme park in Orlando, Florida. It is a signature attraction at this theme park with two hugely popular rides.

Continue reading to learn some interesting facts about the Avatar Flight of Passage ride as well as some cool things to do in Pandora – The World of Avatar.

Where is Pandora – The World of Avatar in Disney World?

As noted, Avatar is at Disney’s Animal Kingdom in Orlando, FL. It is a 12-acre land that opened to the public in May 2017, replacing Camp Minnie-Mickey. The area is set one generation after the events that occurred in the Avatar movies. There are two major attractions in Pandora – The World of Avatar – Avatar Flight of Passage and Na’vi River Journey.

To find Avatar in Disney’s Animal Kingdom, you should enter the Discovery Island area and then head left. As you approach Pizzafari, turn left and walk past Tiffins to enter Pandora – The World of Avatar.

What is the Avatar Flight of Passage ride?

The queue for the ride is designed to immerse you in the world of Avatar. You first walk from the base of Pandora into cave dwellings and jungles to reach a research lab set up by humans to study the new planet. There are lots of clever little details in the queue area that add to the ambience.

The star attraction of the Avatar pre-show, however, is an eerie and amazingly realistic sleeping Na’vi suspended in a giant transparent water container. Next, you enter a chamber to prepare for your flight, in this case onboard a banshee. But first, you must go through a decontamination chamber to get rid of all the “critters.”

The ride vehicles are designed like mountain banshees that carry you away on a breathtaking aerial adventure over incredible landscape. The seats essentially look like stationary bikes (without the pedals) that you mount by swinging one leg over. You get 3D goggles to wear and padded restraints are deployed on your lower back and calves. We find that scooting as far forward as you can is helpful.

Keep in mind that people who are claustrophobic might find the snug restraints and confined room distressing.

The ride itself is thrilling, but we wouldn’t call it exactly wild. There are a few dips and dives and a couple of near misses, but it is overall smooth and enjoyable. The entire experience is highly immersive – even the airbags near your legs inflate and deflate to match the banshee’s breathing.

Do I need to FastPass Avatar?

Usual operating hours for Avatar are 8 am to 7 pm (check the My Disney Experience app for exact times on the day of your visit). The ride is completely indoors so weather doesn’t affect operations.

What’s the height limit for Avatar? Is there a weight limit on Avatar?

In terms of accessibility, Avatar Flight of Passage requires guests to transfer to a standard wheelchair and then to the ride vehicle.

Expectant mothers and those prone to motion sickness or those with medical conditions like high blood pressure or back and neck problems should avoid the Avatar ride. Also, there are some strobe lights (flashing lights) during the ride. Lastly, if you have a deathly fear of heights, avoid this ride.

How much did Avatar ride cost?

Pandora – The World of Avatar truly feels like you’ve entered another planet. The ethereal glow of the bioluminescent forest, floating mountains, strange plants, odd animals, and footsteps that light up when you walk all add to the atmosphere. And the two rides here are incredibly immersive and built with great attention to detail. All this doesn’t come cheap. Disney reportedly spent half a billion dollars on the Avatar theme park.

Is Avatar Flight of Passage the same as Soarin’ Around the World at Epcot?

Both are flight simulator rides, but while Soarin’ Around the World at Epcot uses a giant screen with effects like scents, Avatar Flight of Passage has 3D effects and a unique ride vehicle.

10 Cool Things to Do at Pandora – The World of Avatar

There’s lots to do and discover at the hugely popular Pandora – The World of Avatar at Disney’s Animal Kingdom. Here are our picks of the 10 best things to do at Avatar.

Na’vi art, clothing, and cultural artifacts are available at Windtraders, a great place to pick up interesting and unique gifts and souvenirs.

You can’t miss riding the most popular ride in Disney’s Animal Kingdom.  – Avatar Flight of Passage is the highlight of the land and a flying theater for the senses.

Feel the rhythm of Pandora

The Na’vi Drum Ceremony features orbs, shells, and huge drums played by three artists. Check the schedule for time and location on the day of your visit.

Go on a meditative boat ride

The second attraction at Pandora – The World of Avatar is the Na’vi River Journey. After the thrills of the Avatar Flight of Passage ride, this is a gentle, almost meditative boat ride featuring some of Disney’s best animatronics. FastPass+ reservations are highly recommended.

It looks like a feat of engineering but is computer-generated imagery by the inimitable Disney Imagineers – the floating mountains at Avatar are majestic and awe-inspiring with cascading waterfalls and marvelous plants.

Immerse yourself in the Valley of Mo’ara

Don’t rush in and out from the two most popular attractions in Avatar land. Take some time to immerse yourself in the incredible details of the Valley of Mo’ara, complete with strange animals making peculiar mating calls.

The idea is to immerse guests in the natural world at Avatar. The giant pod-like plant at the entrance of the Valley of Mo’ara responds when you touch it. Try it!

The fully-functional amplified mobility platform called the Exo Carrier Utility Suit worn by characters in Avatar is impressive at 10 feet tall. Watch a Pandoran scientist maneuver it as the rangers discuss conservation.

Visit after dark for a different experience

The bioluminescent plants shimmer in the dark and create a magical atmosphere at Avatar after dark. While many of the details are only visible in the daytime, visiting again after dusk is highly recommended for the ethereal vibe.

What better place to indulge in the exotic than Pandora – The World of Avatar? From otherworldly desserts to alien appearing drinks, eating at Avatar is an experience like no other. Want something a little more fancy? Also nearby is the fine dining venue Tiffins as well as Nomad Lounge which features an extensive wine list and small plate items of food.

So, now that you know what park Avatar is in Disney World and what all there is to do in this land, all there’s left to do is visit Pandora – The World of Avatar at Disney’s Animal Kingdom. Tell us what you loved the most after you’ve tested it out for yourself.